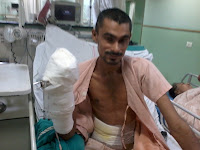 Dinesh, 27 years old poor labourer was taken from Aligarh to Gwalior through sub-contractor to work for M/s Grower Constructions undertaking the work of construction at CRPF Camp, Gawalior sometimes in the third week of September 2011. On 05.10.2011, while he was working on the Mixer Machine, his right hand came in the machine and was crushed. No police report was lodged till date. The employer Shri Sanjiv Grower (M-9810054116, 7869571735), first took Dinesh to JA Groups Hospital at Gwalior the same day but the Hospital advised to take him to some other hospital. Thereafter, the employer took him next day to Sir Ganga Ram Hospital, Pusa Road, New Delhi where Dinesh was admitted as indoor patient vide registration no. 1005565. The employer deposited Rs.15000/- as initial deposit with the hospital and continued to pay the hospital’s bills till 24.11.2011. Dinesh was operated upon one after the other.

On 30.11.2011, the Hospital asked Shri Surinder, the father of the patient to pay a bill for over Rs.90,000/- saying that the employer has refused to pay any more money to the hospital. Shri Surinder is working as daily rated agricultural labourer at Aligarh and hardly earns Rs.100/- a day and that also depending upon the availability of work. Shri Surinder was perturbed to think that his young son would be discharged from the hospital for want of money as it was impossible for him to arrange any money. At this stage, he somehow came in contact with Advocate Ashok Agarwal through Advocate Umesh Singh (M-9871329898). Due to the intervention of Shri Ashok Agarwal, Ganga Ram Hospital has stopped asking the patient’s father to make payment of the hospital’s bills and they are continuing with the treatment of the patient.

However, the question remains that the employer has abandoned its employee in the mid-way. No police complaint was lodged till date nor has any payment on account of compensation been paid to the employee. Both employer and the principal employer (Government of India) are responsible for payment of compensation to the employee. Poor employee is the victim of the cruel and the corrupt system.
Posted by Adv. Ashok Agarwal at 3:08 AM