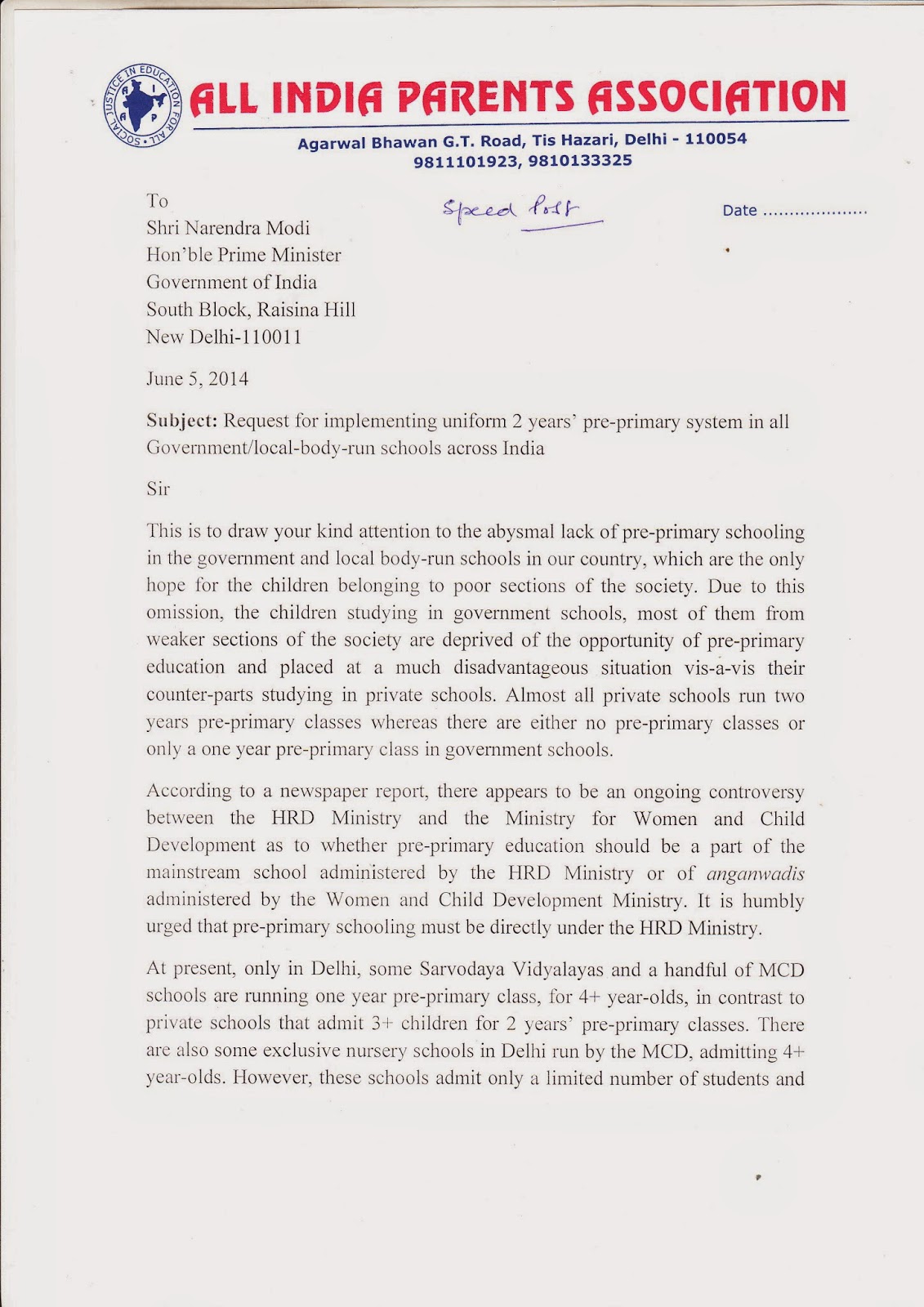 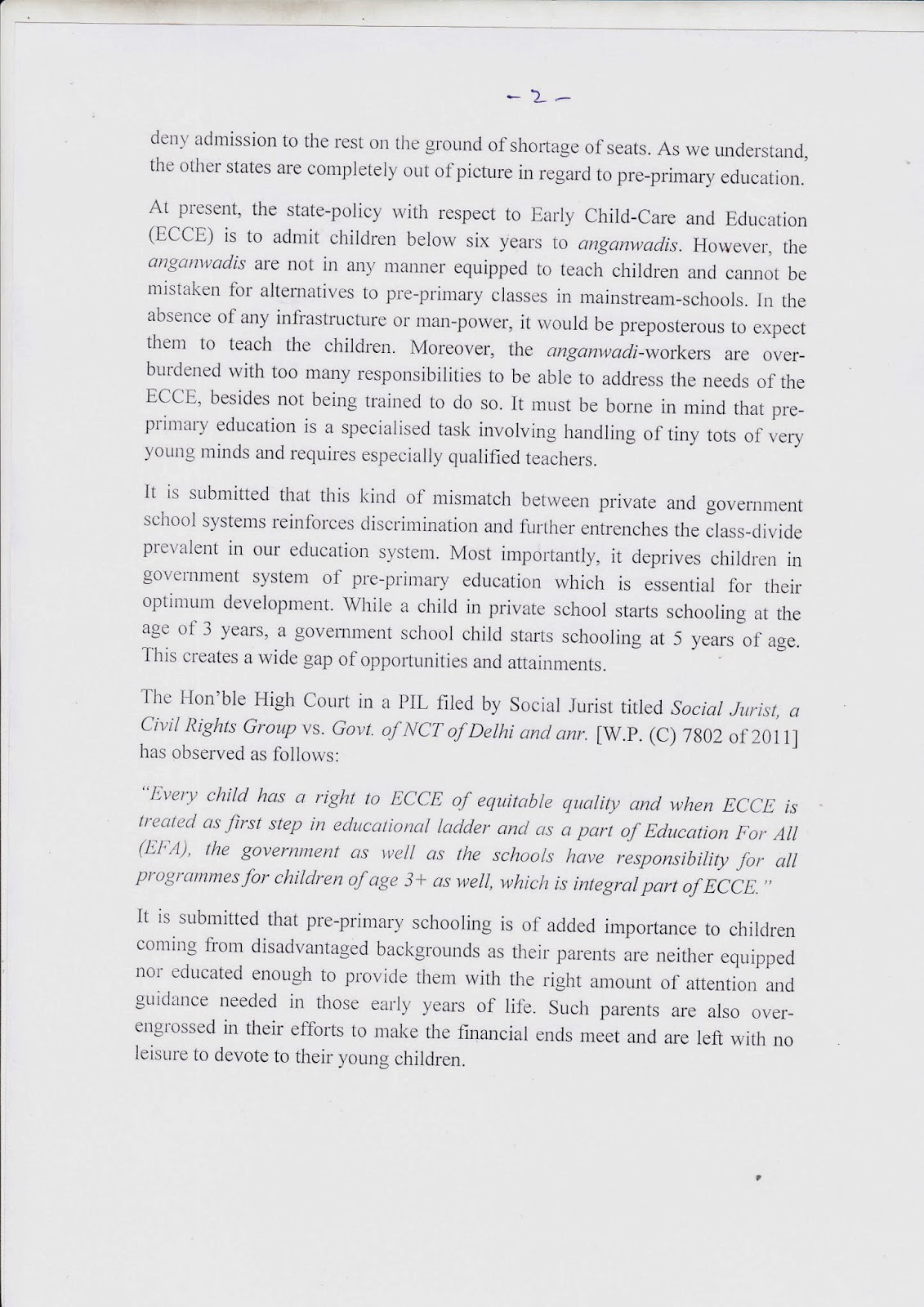 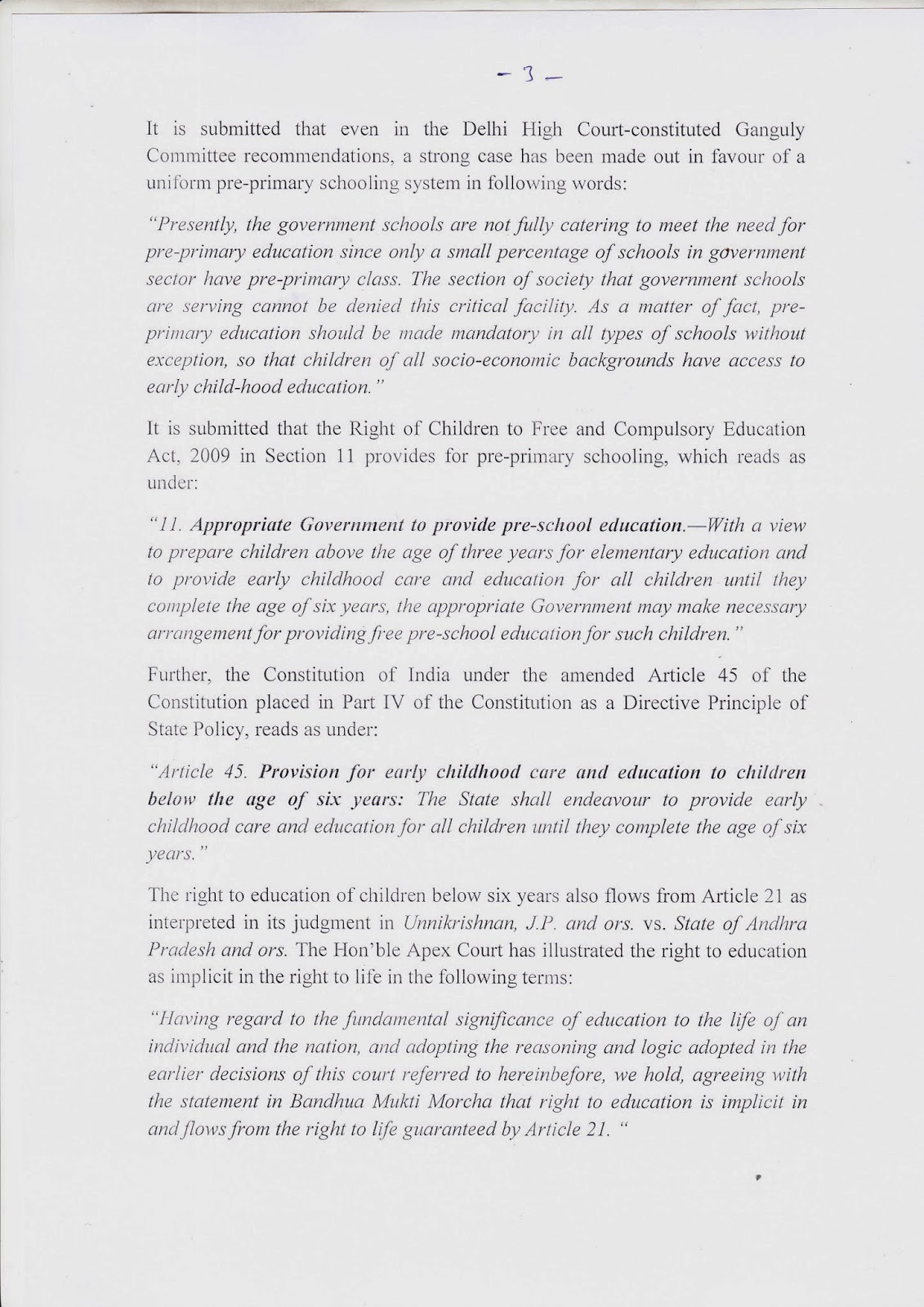 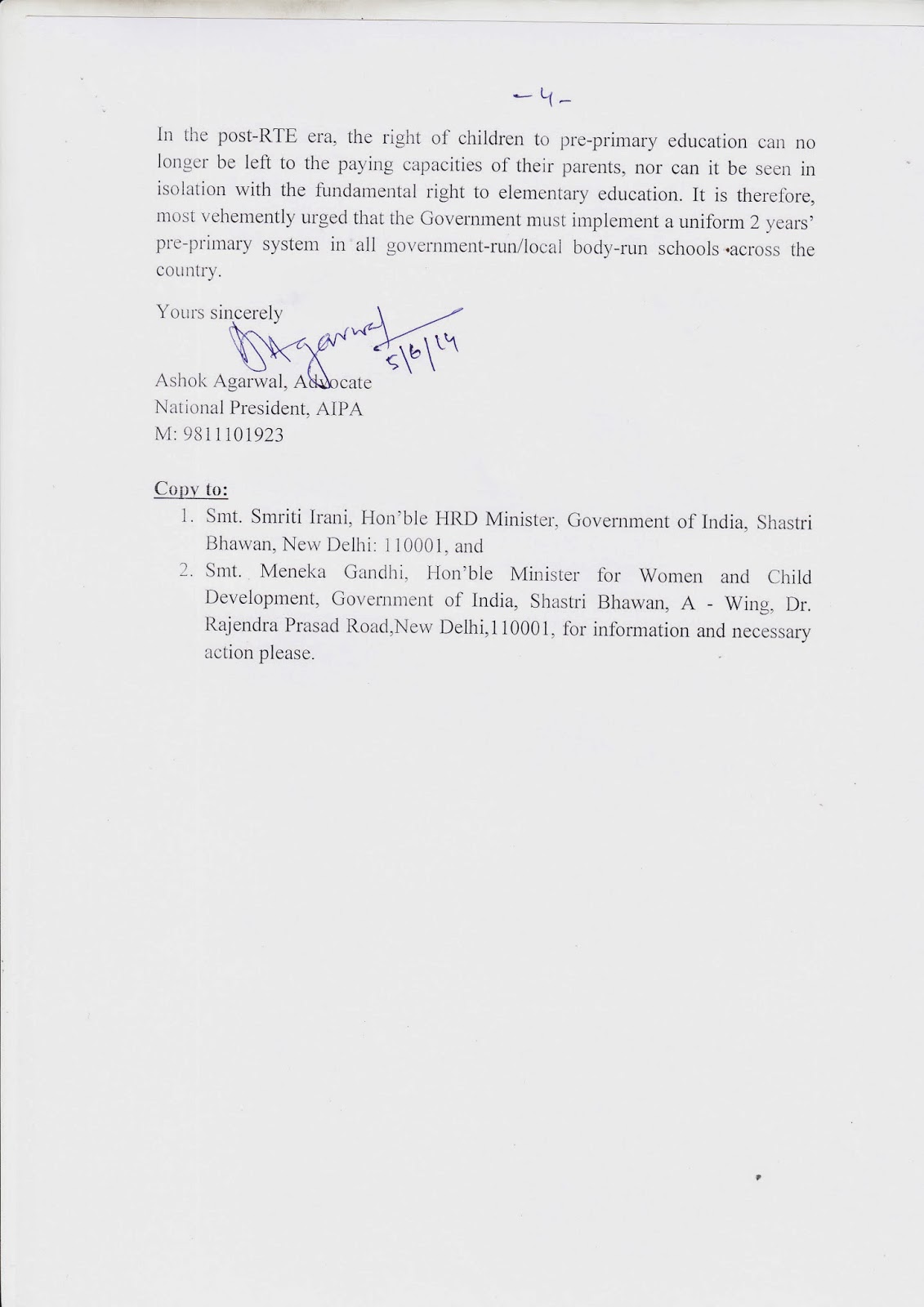 At present, only in Delhi, some Sarvodaya Vidyalayas and a handful of MCD schools are running one year pre-primary class, for 4+ year-olds, in contrast to private schools that admit 3+ children for 2 years’ pre-primary classes. There are also some exclusive nursery schools in Delhi run by the MCD, admitting 4+ year-olds. However, these schools admit only a limited number of students and deny admission to the rest on the ground of shortage of seats. As we understand, the other states are completely out of picture in regard to pre-primary education.

At present, the state-policy with respect to Early Child-Care and Education (ECCE) is to admit children below six years to anganwadis. However, the anganwadis are not in any manner equipped to teach children and cannot be mistaken for alternatives to pre-primary classes in mainstream-schools. In the absence of any infrastructure or man-power, it would be preposterous to expect them to teach the children. Moreover, the anganwadi-workers are over-burdened with too many responsibilities to be able to address the needs of the ECCE, besides not being trained to do so. It must be borne in mind that pre-primary education is a specialised task involving handling of tiny tots of very young minds and requires especially qualified teachers.

It is submitted that this kind of mismatch between private and government school systems reinforces discrimination and further entrenches the class-divide prevalent in our education system. Most importantly, it deprives children in government system of pre-primary education which is essential for their optimum development. While a child in private school starts schooling at the age of 3 years, a government school child starts schooling at 5 years of age. This creates a wide gap of opportunities and attainments.

The Hon’ble High Court in a PIL filed by Social Jurist titled Social Jurist, a Civil Rights Groupvs. Govt. of NCT of Delhi and anr. [W.P. (C) 7802 of 2011] has observed as follows:
“Every child has a right to ECCE of equitable quality and when ECCE is treated as first step in educational ladder and as a part of Education For All (EFA), the government as well as the schools have responsibility for all programmes for children of age 3+ as well, which is integral part of ECCE.”
It is submitted that pre-primary schooling is of added importance to children coming from disadvantaged backgrounds as their parents are neither equipped nor educated enough to provide them with the right amount of attention and guidance needed in those early years of life. Such parents are also over-engrossed in their efforts to make the financial ends meet and are left with no leisure to devote to their young children.

It is submitted that even in the Delhi High Court-constituted Ganguly Committee recommendations, a strong case has been made out in favour of a uniform pre-primary schooling system in following words:
“Presently, the government schools are not fully catering to meet the need for pre-primary education since only a small percentage of schools in government sector have pre-primary class. The section of society that government schools are serving cannot be denied this critical facility. As a matter of fact, pre-primary education should be made mandatory in all types of schools without exception, so that children of all socio-economic backgrounds have access to early child-hood education.”

It is submitted that the Right of Children to Free and Compulsory Education Act, 2009 in Section 11 provides for pre-primary schooling, which reads as under:

“Article 45. Provision for early childhood care and education to children below the age of six years: The State shall endeavour to provide early childhood care and education for all children until they complete the age of six years.”
The right to education of children below six years also flows from Article 21 as interpreted in its judgment in Unnikrishnan, J.P. and ors. vs. State of Andhra Pradesh and ors. The Hon’ble Apex Court has illustrated the right to education as implicit in the right to life in the following terms:

“Having regard to the fundamental significance of education to the life of an individual and the nation, and adopting the reasoning and logic adopted in the earlier decisions of this court referred to hereinbefore, we hold, agreeing with the statement in Bandhua Mukti Morcha that right to education is implicit in and flows from the right to life guaranteed by Article 21. “

In the post-RTE era, the right of children to pre-primary education can no longer be left to the paying capacities of their parents, nor can it be seen in isolation with the fundamental right to elementary education. It is therefore, most vehemently urged that the Government must implement a uniform 2 years’ pre-primary system in all government-run/local body-run schools across the country.
Yours sincerely