We are hereby raising a fundamental question of law of general public importance for your kind consideration as to whether it is not the duty of the State to step in for the protection of human and Fundamental Right to Life of a child whose parents, for economic or other reasons, choose to withdraw the child from a life saving medical treatment.

Master Adil, aged 10 years, son of a Rikshaw-puller, Gauhar Ali, resident of 287, Dheemani Ashink, Dheemani, Moradabad, Uttar Pradesh [Mob.- 09045173686] is suffering from Acute Myeloid Leukemia (blood cancer) and also a tumor in his left eye. The patient was first taken to JLN Medical College Hospital, A.M.U., Aligarh, U.P., where he remained admitted from 12.07.2014 to 15.07.2014, after which his parents brought him to Delhi to seek treatment, as was advised by the doctors. The father of the patient had approached me on 17.07.2014 for free treatment of his son under EWS category in a suitable identified private hospital. Being a member of the Delhi High Court-constituted EWS treatment Monitoring Committee, I referred him to Action Cancer Hospital, Paschim Vihar, New Delhi. He was admitted to the said hospital on 17.07.2014 itself.

During the course of Adil’s treatment as an in-patient, Action Cancer Hospital referred the patient to AIIMS for the removal of his eye-tumor, in view of the degree of specialization involved. According to the doctor, the treatment for leukemia could only be started after the removal of eye-tumor.

On 22.07.2014, at my instance, law students Siddharth Seem, Prabhat Kumar, Kanishk Arora and Rahul Pawar interning under me went to Action Cancer Hospital to facilitate the child’s transfer to AIIMS. Action Cancer Hospital had agreed to provide an ambulance and all related assistance for the transfer. However, the patient’s father, perhaps burdened by ancillary expenses, was insisting upon getting the patient discharged from the hospital so that he could take him back to their village in Uttar Pradesh. The doctors at the Action Cancer Hospital and my interns made persistent efforts to explain to the patient’s father that the patient’s survival would only be possible if he is taken to AIIMS immediately. But the patient’s father chose to get the patient discharged, against medical advice and we all were rendered helpless by the father’s decision. In view of my interaction with the treating doctor, I have a bona fide apprehension that the child would die soon if left untreated.

This incident raises serious questions on our country’s legal system relating to the children’s human and Fundamental Right to life, which directly includes healthcare at all levels, more so when it is essential for the child’s survival. I am of the firm view that this is not a solitary case but a mere illustration of the wider reality of children’s life and health being jeopardized due to the guardians’ ignorance.

It is submitted that in the present era of child rights, the State can no longer remain a mute spectator to such instances which involve critical decision-making for the life and health of a child, nor can the state leave it to the mercy of the parent or guardian of the child whether or not to save the life of a dying child.

Needless to say, Article 21 of our Constitution ensures Right to Life to every person. Further, the National Charter for Children, 2003 imposes a responsibility upon the State, parents, communities and on the society to protect the best interest of children in their obligations in fulfilling the basic needs of the children. Section 1(a) thereof states that the State and community shall undertake all possible measures to ensure and protect the survival, life and liberty of all children.

India has acceded to the UN Convention on the Rights of the Child on 11.12.1992. Article 6 thereof gives recognition to the child’s inherent right to life and enjoins upon the State to ensure to the maximum possible extent possible the survival and development of the child. Article 18 Clause 2 casts a duty upon the State to render appropriate assistance to parents and legal guardians in the performance of their child-rearing responsibilities and ensure the development of institutions, facilities and services for the care of children, for the purpose of guaranteeing and promoting the rights set forth in the Convention. Article 24 Clause 1 accords recognition to the child’s right to the highest attainable standard of health and to facilities for the treatment of illness and rehabilitation of health. Further, it casts a duty upon the State to ensure that no child is deprived of his or her right of access to such health care services. Clause 2 of the same Article enjoins upon the State to pursue full implementation of this right. Sub-clause (a) particularly casts a duty upon the Sate to take appropriate measures to diminish infant and child mortality.

There have been instances all over the world where the State has stepped in to save the life of a child requiring medical treatment, even superseding the will of his or her parents. In one such instance in the US in May 2009, a Minnesota judge issued an arrest warrant against a woman who was denying treatment to his 13 year old son named Daniel Hauser suffering from Cancer. The warrant was issued after neither she nor her son had showed up for a court appearance.
However, in India, despite Constitutional provisions, provisions under National Charter, 2003 and obligations under International Conventions, there is a complete absence of laws and policies to tackle the situation where a guardian fails to do the needful for a child requiring life-saving treatment.

Under parens patriae doctrine, the State ought to act as a guardian to the children, in order to protect at least the most essential and Fundamental rights to life and health. The State must take recourse to every appropriate measure in the direction of protection of these rights of its children.

You are requested to kindly treat this letter as a PIL and direct the State to immediately take over the responsibility of Master Adil’s treatment and do everything necessary for saving his life, at the earliest. Further, certain laws, policies and protocols need to be laid down in order to take care of such contingencies in future. 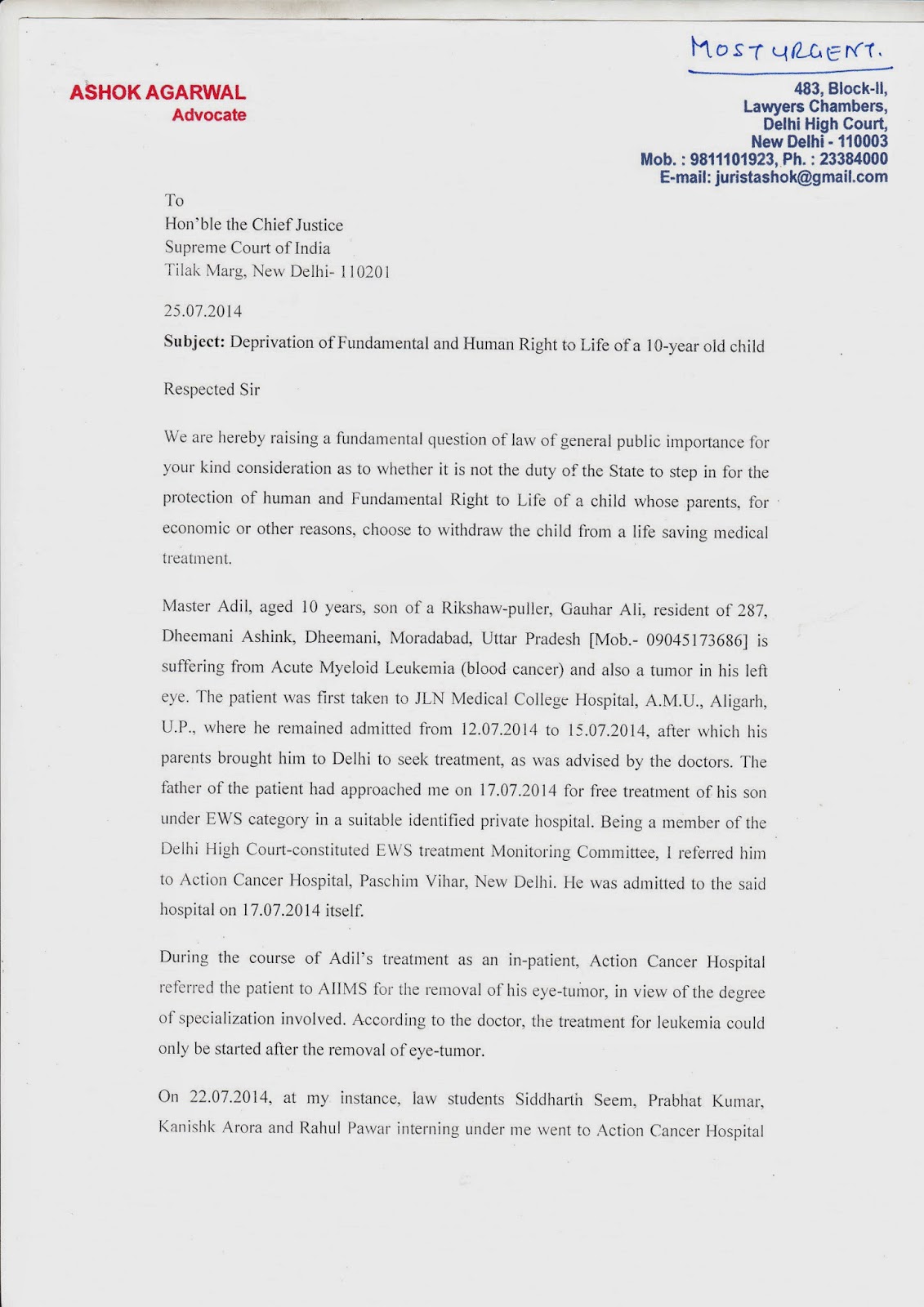 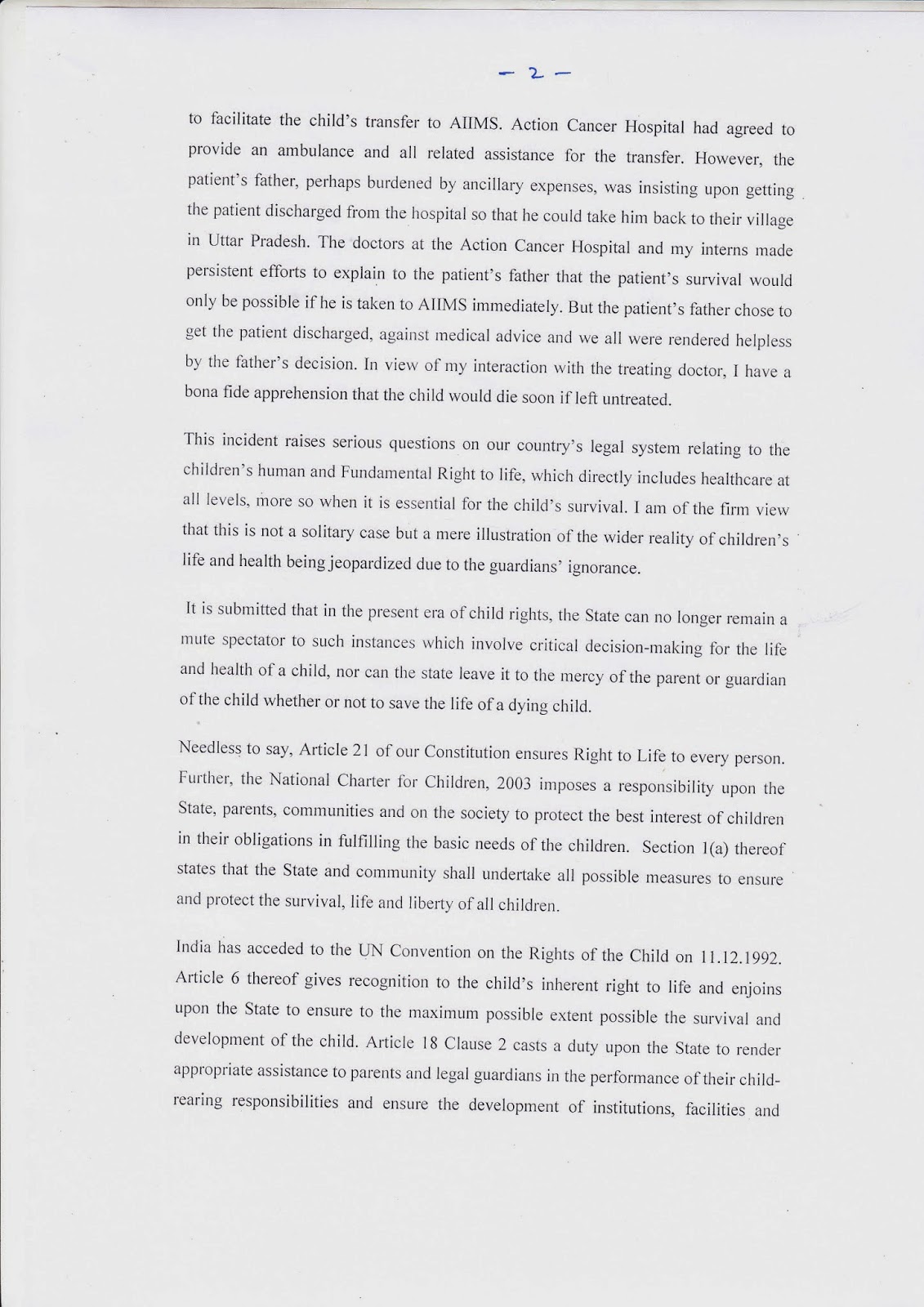 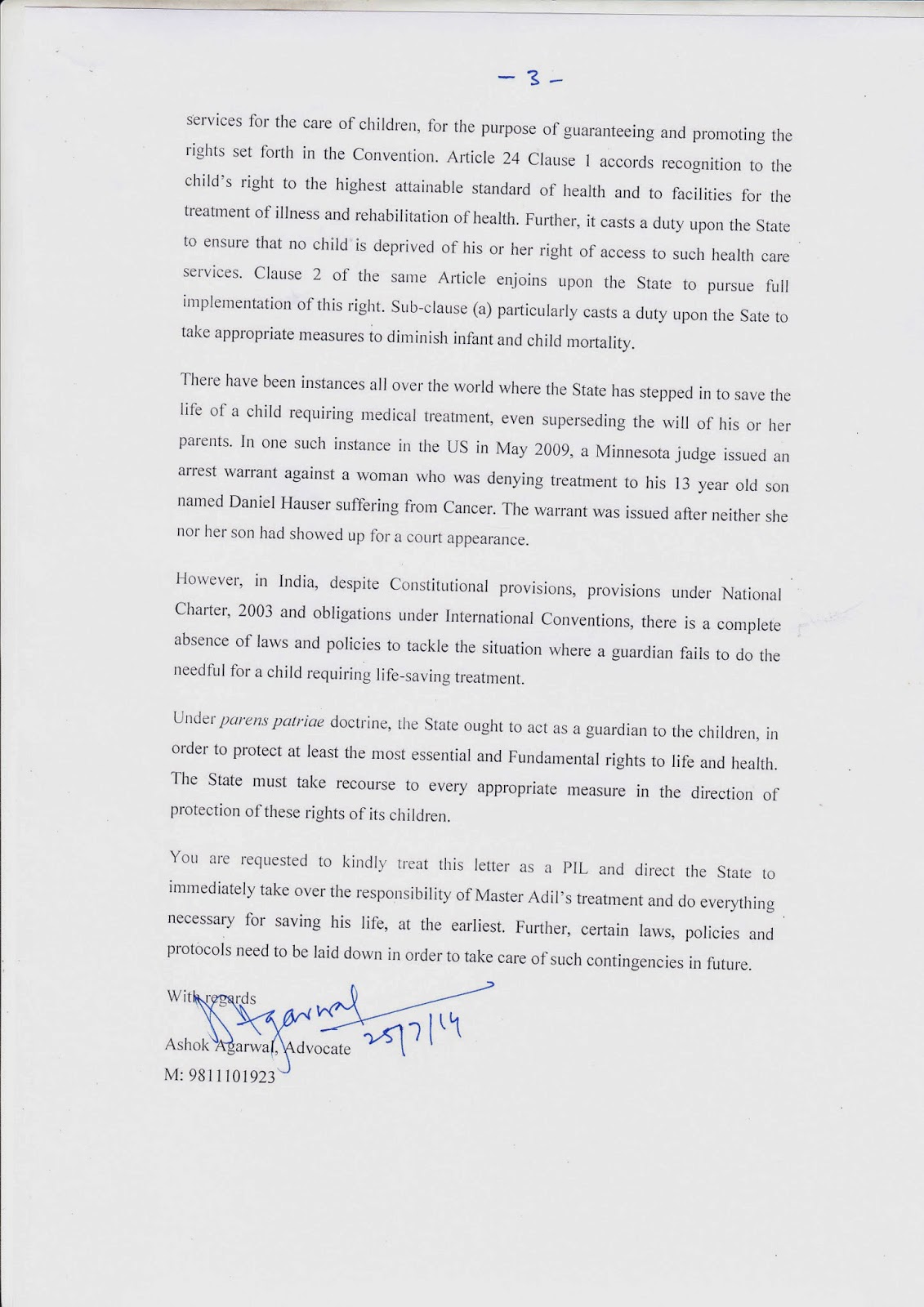 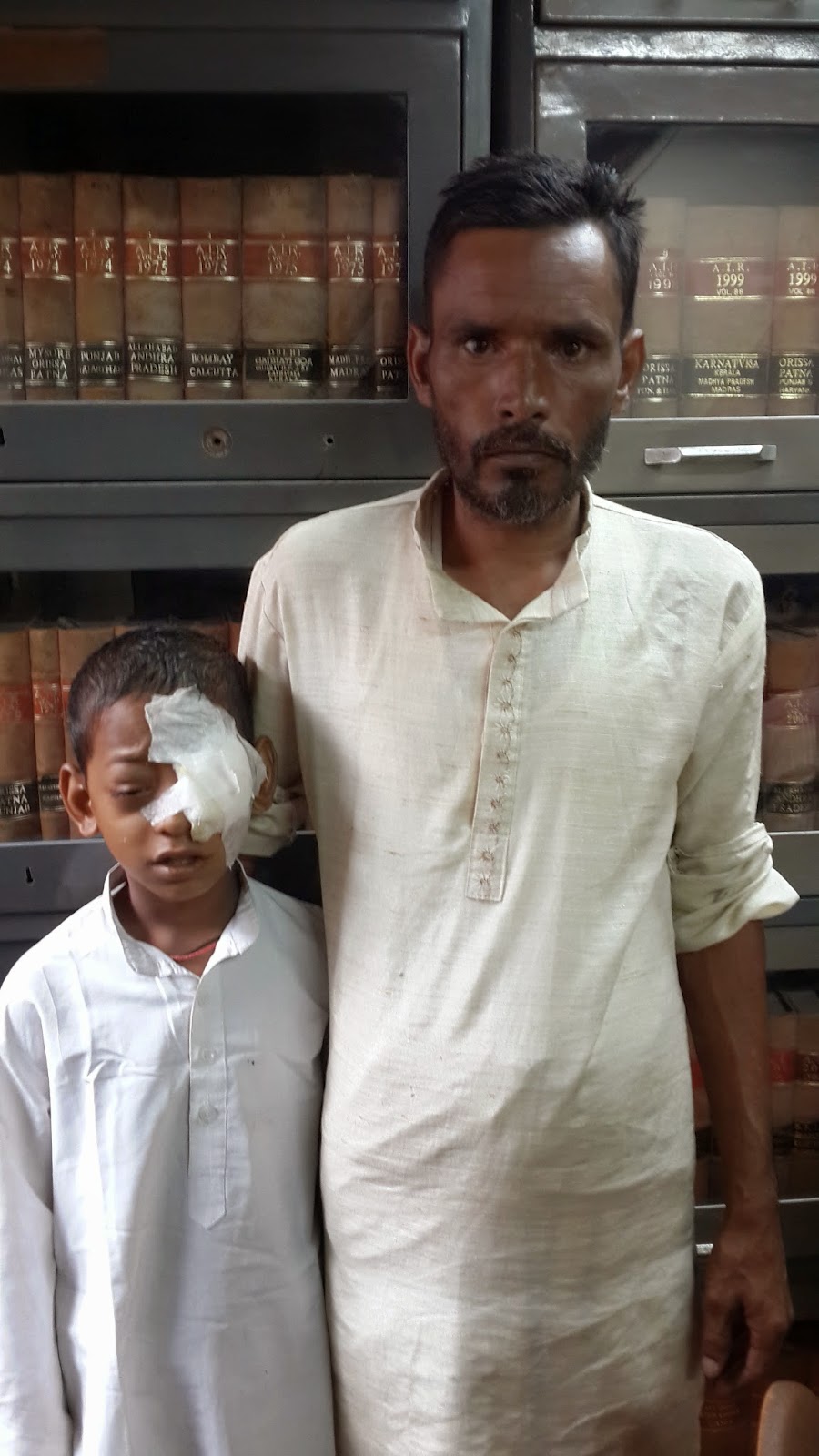