PARENTS'S COMMENTS UPON THE DRAFT AMENDMENTS TO THE DELHI SCHOOL EDUCATION ACT & RULES, 1973

Subject: Comments upon the draft amendments to the Delhi School Education Act & Rules, 1973

The proposed Delhi School Education (Amendment) Rules 2015 are an improvement over the previous draft in so far as the new Rule 145 clearly empowers and mandates the Director to regulate admission in private unaided schools and uses the term “fair” along with “transparent”. However, it is still very vague and amenable to misinterpretations and abuse. I therefore propose that this Rule should prohibit screening at entry level on the lines of Section 13 of the Right of Children to Free and Compulsory Education Act, 2009, which would leave no scope for ambiguity and settle the controversy for good. Also, there would not be much left to executive instructions if the Rule itself is worded clearly and explicitly. There is no need for further delegation of power if the Rule can itself be made specific. This Amendment would also be in consonance with the observations of the Hon’ble Delhi High Court in W.P. (C) No.8533/2010 titled Social Jurist vs. GNCTD & ors.

As far as the Delhi School Education (Amendment) Bill, 2015 is concerned,  it fails to cater to the mischief of exorbitant and unjustified fee-hike for reasons that I have already communicated to the Government vide my letter dated 01.06.2015. The said reasons are reproduced as under:

Firstly, it presupposes that fee-hike by the private schools is per-se legal and valid, unless the same is challenged through a complaint and is set aside by the committee. If we look at the existing Acts on private unaided school-fee regulation, particularly the Tamil Nadu (Regulation of Collection of Fee) Act, 2009, there is a stipulation of prior approval by the Committee before fee-hike and the said hiked fee, once approved, cannot be further hiked upto three years. While here, this Bill has put the entire burden upon the complainant. It is expected that the Delhi’s Act should be advancement over Tamil Nadu Act and should surpass the benchmark set by Tamil Nadu, but this Bill falls way short of even what Tamil Nadu has already achieved.

Secondly, this Bill suffers from various practical anomalies. The burden has been cast upon the aggrieved parent to move in complaint. This onerous task would make the parent, and ultimately the child, amenable to be subjected to victimization. Further, once a complaint is made, no time-limit has been stipulated for disposal of the same by the committee, making it liable to be reduced to futility by sheer lapse of time. Even after a complaint has been decided, there is enough room for delay as the school can file objections, and even after consideration of the same and final decision by the committee, there is a provision of appeal to the Director, for disposal of which, no time-limit has been stipulated. The school shall thus continue to enjoy its free hand at least throughout the process which has enough scope for inordinate delays. The committee itself is a rather weak one compared to the Tamil Nadu model where a retired judge of the High Court heads the Committee.

It is needless to mention here that the Hon’ble Delhi High Court in its decision dated 12.08.2011 in Delhi Abhibhavak Mahasangh & ors. vs. GNCTD & ors. [W.P. (C) No.7777/2009] had constituted Justice Anil Dev Singh Committee to look into the accounts of each school and find out whether the fee-hike by private unaided schools on the pretext of 6th Central Pay Commission was justified. The High Court had further directed that if the fee-hike was found to be unjustified, it would be refunded by the school to parents along with 9% interest. Justice Anil Dev Singh Committee has so far indicted more than 450 schools and the refundable amounts cumulatively come to more than Rs.250 crores. However, till date, not a single school has refunded the due amounts to the parents.

Even in 1997, when the parents had approached High Court against fee-hike on the pretext of implementation of 5th CPC, the High Court vide an interim Order had permitted the schools to increase fee by upto 40%, resulting in recovery of over Rs.400 crores from the parents of Delhi, which was to be subject to the findings of Justice Santosh Duggal Committee and liable to be refunded if found unjustified. However, the working of the Committee was deliberately stifled by the Directorate of Education and the private schools, with the result that till date no amount has been refunded to the hapless parents. Thus, it is our experience that once a school charges fee from the parents, it becomes next to impossible to get it refunded.

Since education is a charitable activity and profiteering is impermissible in education, and moreover, since it is the parents’ money which runs the school and they are prime stakeholders in the functioning of the school, including its financial aspects, the parents in private unaided schools deserve a minimum 50% representation in the Managing Committee. This would not only check commercialization in education but also enhance the overall quality of education in private schools. Thus, Rule 59 of the Delhi School Education Rules also needs to be amended to provide for at least 50% representation of parents in the Managing Committee in order to ensure effective check upon fee-hike and commercialization of education by private unaided schools.

The Bill needs to be thoroughly reworked in the light of the above. However, I personally feel that it would be a rather better option to enact an independent legislation on fee–regulation on the lines of Tamil Nadu, even more robust and effective than Tamil Nadu. 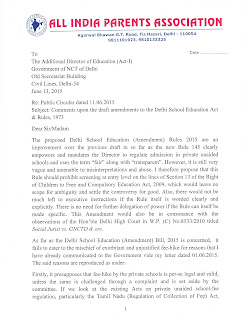 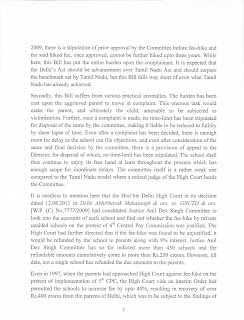 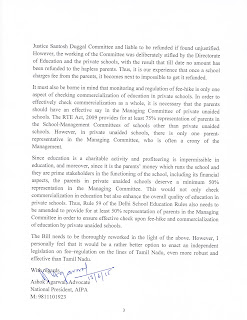