Subject:PIL Letter – Gross violations of child rights in Buland Shahar District of U.P.
Respected Sir,
Social Jurist, A Civil Rights Group consists of practicing lawyers and social activists dedicated to the cause of common man and particularly of children.
Through this letter, I wish to draw your kind attention towards the gross violations of child-rights, including the fundamental rights to education and freedom from exploitation rampant in Bulandshahar District of U.P. These violations have come to my notice during my visit along with social worker Sunita Chouhan to Sarai Ghasi, Sikandrabad, district Bulandshahar, U.P. on January 1, 2015 as part of my organization Social Jurist’s initiative to spread awareness on rights to education, health and labor-rights. Such violations are certainly not restricted to this particular area but are commonplace throughout the State of Uttar Pradesh, which is a matter of serious concern.
In order to assess the public education system, I made visits to the Anganwadi, primary schools and inter-college in village Sarai Ghasi. There are two government primary schools and one government-aided inter-college (Class VI-XII). Two rooms in one of the primary schools have been given to Anganwadi Workers to run Anganwadi for the small kids. The conditions are more or less pathetic in all of them. Observations in some detail are given below:
The Anganwadi
The two rooms allotted to the Anganwadi serve the dual purpose of store-room and class-room/child-care centre. Lot of space in both the rooms was occupied by wheat bags. Both the rooms were dark. There was no electric connection.
Tender-aged children were sitting on a mat made of plastic rags stitched together. The surface of the same was chilling cold. Two small kids were cleaning the room with brooms in their hands in the presence of Anganwadi workers. The utensils which the children had brought for mid-day meal were unclean. One of these kids was having a school bag with him and when the same was opened, bits of a torn book were found.
We were told that most of the kids at the Anganwadi were the children of the migrant-workers working in the brick-kiln industry.


It is submitted that both these primary schools found to be non-compliant schools in terms of the minimum norms prescribed under the Right of Children to Free and Compulsory Education Act, 2009. It is not difficult to image the state of primary schools in other part of the U.P.
The Inter-College
In the Inter-College, a government aided institution, some 600 students are enrolled. There is an option for science stream but no science lab in the school. It was heard that there were some computers in the school but they were stated to have been kept safely locked inside some secret room. Anyway, there was no computer-teacher. There was no electricity and no desks in the classrooms. Windows were broken and dilapidated.


Overall, there was no conducive atmosphere for education in any of these institutions.
Brick-Kiln
I also happened to visit a brick-kiln site in the village. Nearly 70 migrant families, who had settled around this area for the past 6 months, were employed there. I was informed that the families were paid Rs.450 for every 1000 bricks. All the members of the family, including children, were working in the brick-kiln. More than a hundred children were below 14 years of age. Obviously, none of these children was attending any school. I was told that there were two more such brick-kiln sites in the village where similar situation was prevailing. Child labour is prohibited in the brick-kiln process under the provisions of the Child Labour (Prohibition and Regulation) Act, 1986. The employment of children in this brick-kiln not only constitutes a violation of the statutory rights of the children but of their Fundamental Rights against exploitation under Article 24 of the Constitution of India


It is respectfully submitted that State of Uttar Pradesh has done nothing to improve the conditions of the Government Schools and to bring all the out of school children in school. It is needless to say that Child Labour is a National Shame and the State of Uttar Pradesh has to check the same and ensure that whatever is required to be done for providing quality education to all the children in Government-run schools must be done immediately.
In these circumstances, you are requested to kindly treat this letter as a PIL and take suo motu cognizance of the child-right-violations mentioned herein, so that these and such other violations taking place in other corners of the State of Uttar Pradesh may be checked in future.
Some photos are attached hereto. 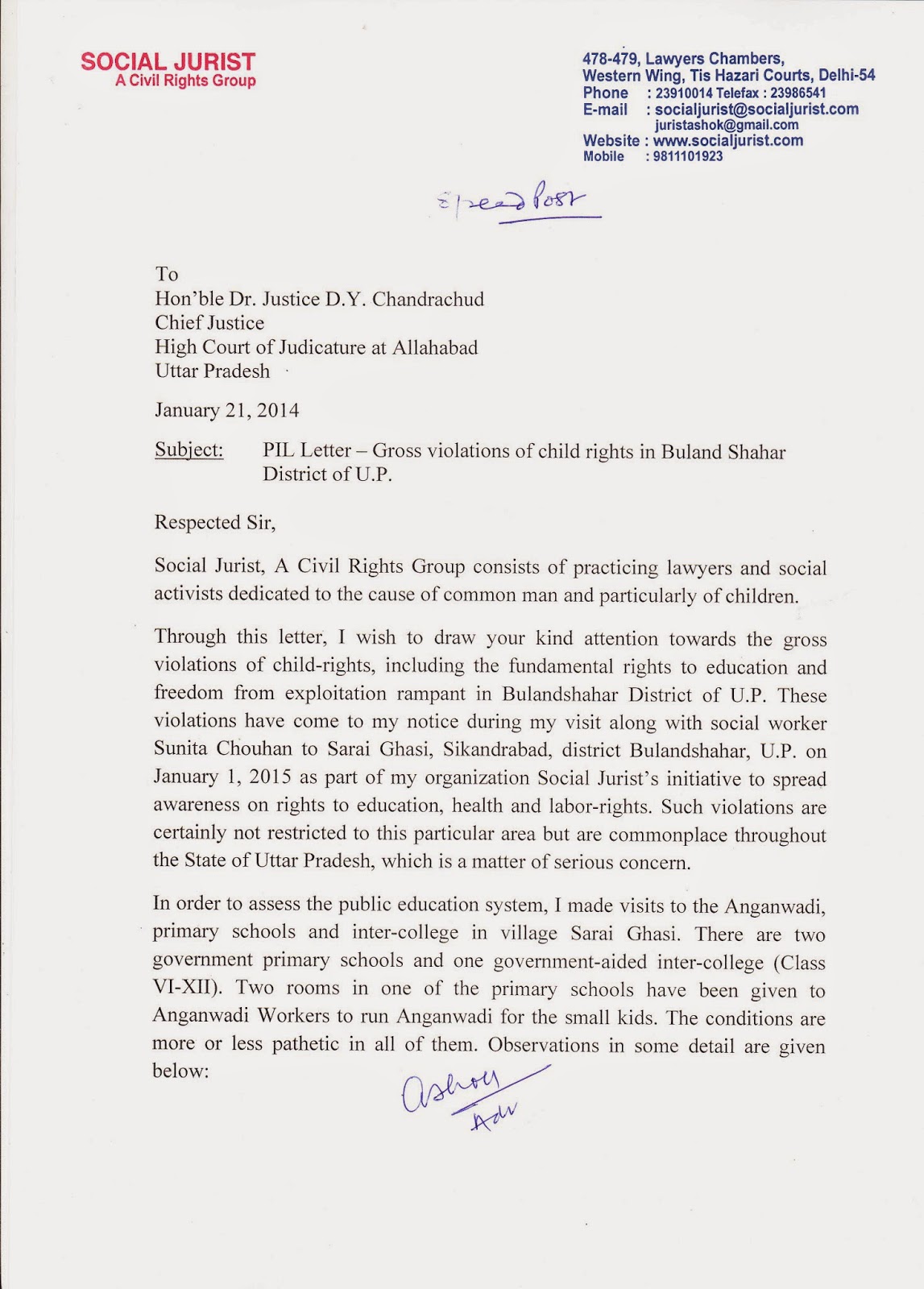 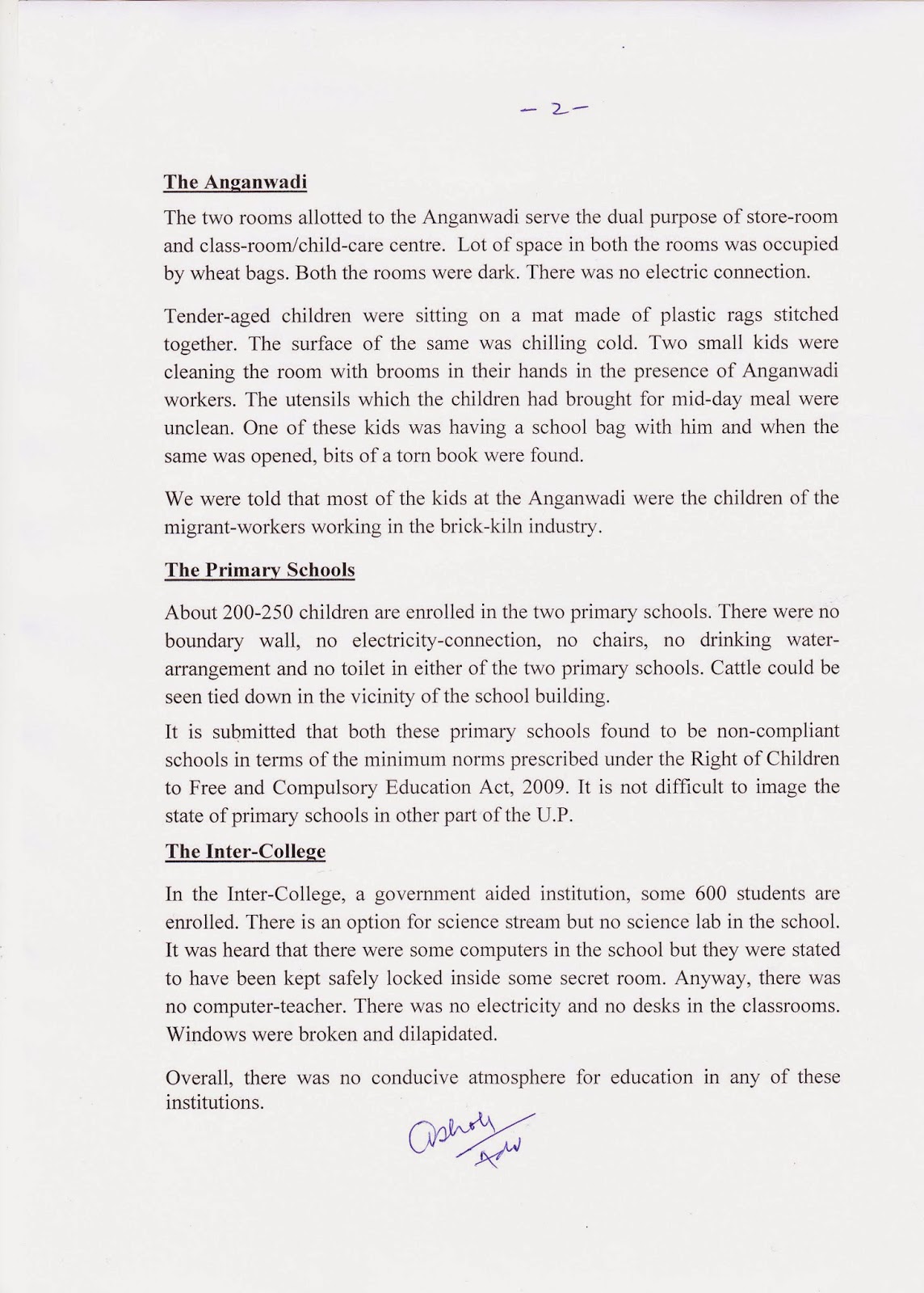 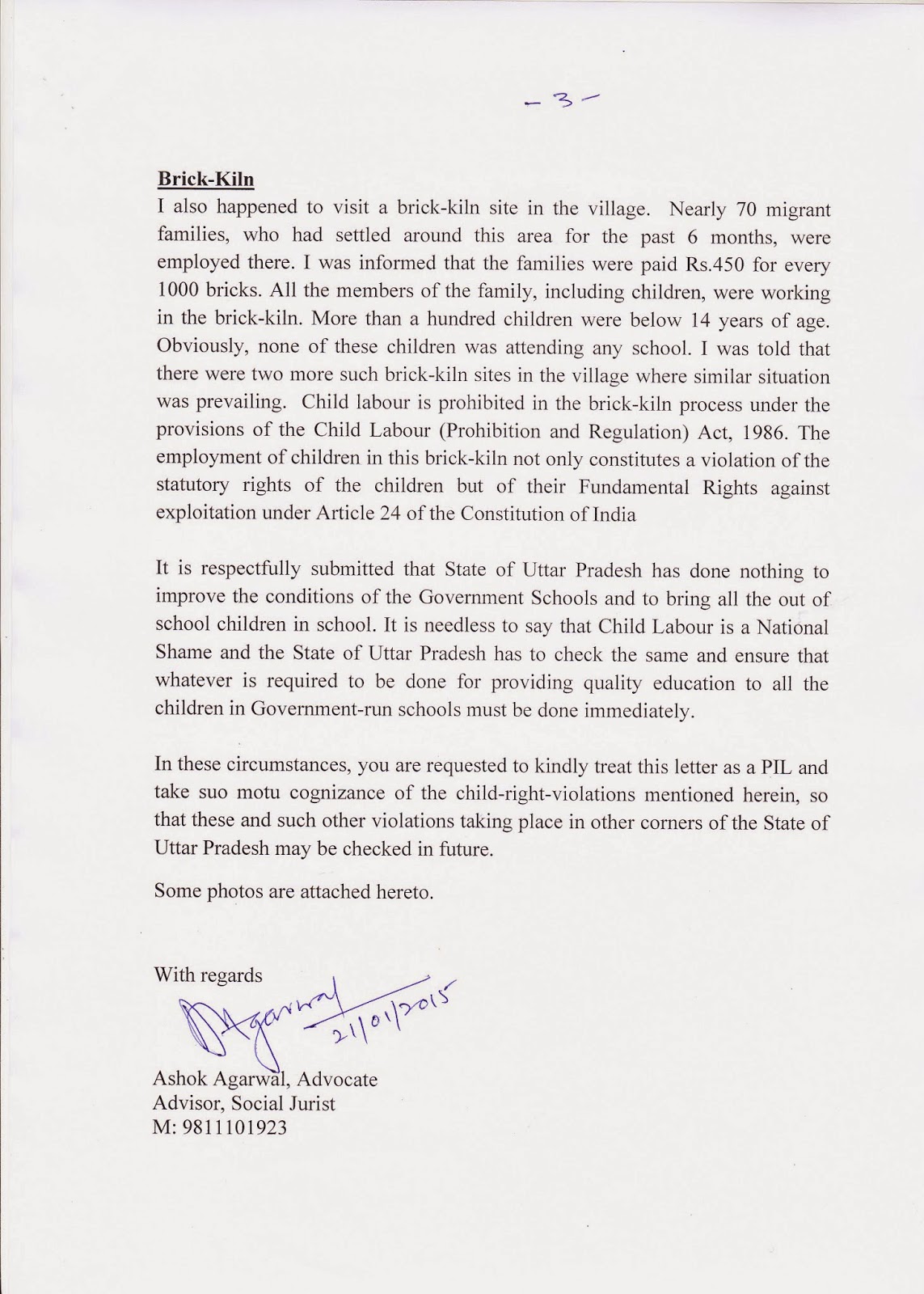