Stop Delhi Govt. to delete one fourth of the topics covered in NCERT textbooks prescribed in Delhi’s schools - Parents body appeals to the President of India

Sub:    Appeal to stop Delhi Govt. to delete one fourth of the topics covered in NCERT textbooks prescribed in Delhi’s schools

It is a matter of great concern that the Government of Delhi has decided to delete one fourth of the topics covered in NCERT textbooks prescribed in Delhi’s schools. This move will damage equality of opportunity for the children belonging to the poorer sections of society. As it is, there is a vast gap between the infrastructure and standards of teaching in different types of schools. However, all schools in Delhi are affiliated to the CBSE. This creates a certain degree of parity among state-run schools, Kendriya Vidyalayas and English-medium public schools. Under the CBSE pattern, all these schools teach NCERT textbooks. The Delhi Government’s decision to delete 25 per cent of lessons will destroy this limited parity. Instead of creating a level playing field for children from different socio-economic backgrounds, the AAP government wants to widen the gap between different kinds of schools.

We appeal to you Sir, to intervene and immediately stop the deletion exercise unilaterally initiated by the Delhi Government. 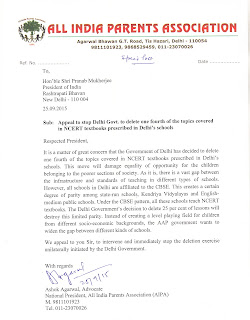