This is another case out of several cases coming to our notice where the ESI has failed to fulfil its constitutional and statutory duty to provide free and continuous treatment to the workers and their dependents by resorting to illegal and unconstitutional guidelines framed by the administrative authorities defeating the entire object of the ESI Act.

Smt. Ayesha wife of the Sh. Azad Ali is suffering from Acute Lymphoblastic Leukaemia (Blood Cancer).  She being a beneficiary under the said I.P. number for being the wife of the workman, has been undergoing treatment at the ESI Hospital, Rohini. She was ultimately, referred by the ESI Hospital to its empanelled hospital, namely, Action Caner Hospital for the super speciality treatment.

Smt. Ayesha was given treatment at the Action Cancer Hospital from 27.07.2015 pursuant to the ESI reference. However, after the 25 days of treatment, the bill of the hospital crossed Rs. 9, 12, 817/- . The moment the bill of the said hospital crossed Rs. 10/- lacs, the ESI stopped giving approval for treatment. The Action Cancer Hospital discharged the said patient in absence of further sanction of treatment by the ESI. The ESI authorities’ relying upon the clause 5 of the ESI guidelines dated 29.08.2014, refused to sanction further treatment of the patient. The said guideline is reproduced as under:-

“5.1 Upper limit on the expenditure for procedures not covered under CGHS package rates would be Rs. 10 Lakh per beneficiaries per year.”

The ESI has stopped approval of the treatment of Smt. Ayesha as the expenditure has nearly crossed the limit of Rs. 10 lacs. Smt. Ayesha is in urgent need of treatment. Any delay at this stage could be fatal to her life. At present, Smt. Ayesha has been admitted in the Delhi State Cancer Institute run by the Delhi Government. However, it does absolve you from your legal obligations towards her. She wants to continue her treatment at Action Cancer Hospital.
The said provision of your guidelines is illegal, unjustified, unconstitutional, hit by Art. 21 of the Constitution and is contrary to the provisions of the ESI Act. The ESI has no authority or power to issue such guidelines under the provisions of the ESI Act. It is pertinent to mention herein that the said guidelines have already been challenged in W.P. (C) No. 8445/2014 titled “Mohd. Kalim V ESIC”. The Hon’ble Delhi High Court in the said writ petition has passed some interim orders against you. However, the matter is pending for decision.

You are therefore called upon by this notice to approve the treatment of Smt. Ayesha w/o Sh. Azad Ali irrespective of the cost of treatment crossing the said limit and continue the same unabated in future. You are also called upon to withdraw the said illegal and unjustified guidelines and not to deny treatment to any patient on the basis thereof. In case, you fail to provide treatment to Smt. Ayesha as demanded above, she shall be constrained to move the Hon’ble Delhi High Court for relief. 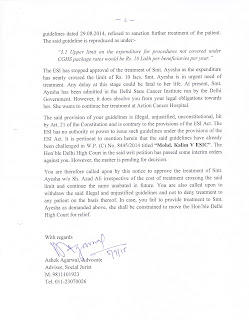 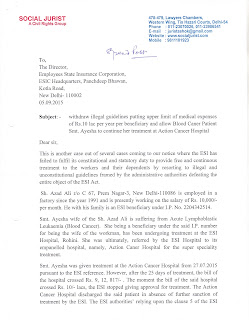