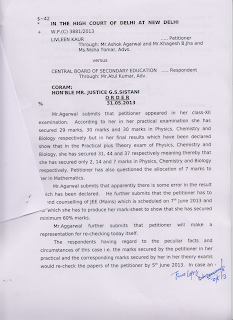 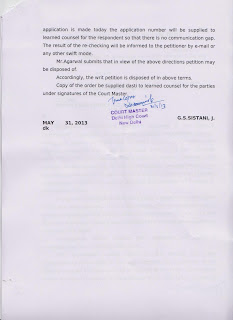 Status as on 03 Jun 2013 Registration Number : DSEHE/E/2013/00800
Name Of Complainant : Sukanya Kadyan
Date of Receipt : 03 Jun 2013
Received by : Ministry of Human Resource Development
Officer name : Shri Amit Khare
Officer Designation : Joint Secretary (Admn. & PG)
Contact Address : C Wing,
Shastri Bhawan,
New Delhi110001
Contact Number : 23388632
Grievance Description : The joy of clearing the IIT entrance exams quickly turned sour for Livleen Kaur when she saw her CBSE results. The 18-year-old was stunned to see that she had failed in three papers - physics, mathematics and biology. What's even more surprising is that two of the subjects - physics and mathematics - were the ones she had to clear to crack the IIT. Flabbergasted by the results, Livleen moved the Delhi High Court on Friday which directed the CBSE to recheck her papers within four days and inform her about the results by June 5. What makes her scores more shocking is the difference between her practical and theory marks. According to her marksheet, Livleen has secured full marks in chemistry and biology practical scoring 30 out of 30 while she has secured a brilliant 29 in physics. On the other hand, Livleen is said to have scored 2, 14, and 7 marks in physics, chemistry and biology out of 70 marks in theory papers. According to CBSE, she has just scored a mere 7 out of 100 in mathematics too. Justice G.S. Sistani granted the much needed relief to Livleen after she pressed for an urgent re-evaluation of her papers citing her counselling at IIT on June 7. She said she has to prove that she has scored a minimum 60 percent in CBSE at the counselling session. If the CBSE fails to provide her with an 'original' marksheet by then, she would be declared ineligible for IIT. The petition filed through advocate Ashok Agarwal said: "The petitioner has cleared the Joint Entrance Examination JEE 2013 (main) securing 926th rank and her counselling for IIT admission is due for June 7, 2013. It is submitted that the Class XII result as shown online shall render the petitioner ineligible for the said admission. The petitioner is of the firm view that her original marksheet would reveal the marks actually scored by her as those published online are not correct." Stating that she is confident about an error in the CBSE results, Livleen, in her plea said: "Even as per the disclaimer published on CBSE website under the result, this result is only for immediate information and cannot be treated as final." Like wise I was also a sufferer of CBSE twice in 2007 and 2008: IN THE HIGH COURT OF DELHI AT NEW DELHI: 31.07.2007 Present: Father of the Petitioner. Mr Atul Kumar for the Respondent. WP (C) 5109/2007 The examination papers were produced by Mr Atul Kumar. The marks given in those papers matched the marks awarded to her in the mark-sheet. No further direction is necessary in this writ petition.The same is dismissed. BADAR DURREZ AHMED (JUDGE) July 31, 2007 Hence all tainted official be removed from their service after booking them and lodging FIR against them, justice should be given to this girl and I am praying for her better future.

What was the end result? Did her marks increase in rechecking

di the CBSE has corrected her marks?