Amend the Constitution of India to bring Minority Schools within the ambit of RTE Act, 2009 - AIPA writes to PM Narendra Modi

Subject: Request for Amendment of the Constitution of India to bring Minority Schools within the ambit of RTE Act, 2009

We extend heartiest congratulations to you on assuming the prestigious office of the Prime Minister of India. As a collective of parents, we wield high hopes in you that you will shoulder the responsibility of shaping the future of this country by securing the children their educational rights in the most befitting manner. On this occasion, we wish to draw your attention towards an important issue concerning the right to education of students studying in minority schools across the country.
The Hon’ble Supreme Court in its Judgment dated 12.04.2012 had held that Article 21-A of the Constitution of India does not apply to unaided minority schools and therefore, the provisions of Right of Children to Free and Compulsory Education Act, 2009 (The RTE Act, 2009) do not apply to Unaided Minority Schools. Thereafter, the Hon’ble Supreme Court in its latter judgment dated 06.05.2014 by a larger Bench has held that the Act is not applicable even to aided minority schools. However, the Hon’ble Supreme Court had pointed out in its former judgment that all minority schools can be brought within the purview of Article 21-A if an amendment is made in the Constitution of India to include the minority schools within the purview of Article 21-A of the Constitution of India.

It is submitted that keeping minority schools out of the purview of Article 21-A of the Constitution of India has not only resulted in discrimination amongst the children but has also resulted in depriving the children attending such private schools of various valuable rights as incorporated in the RTE Act, 2009.

It has been noticed that after the aforesaid Judgment of the Hon’ble Supreme Court, many non-minority private schools are converting themselves into minority schools to avoid the obligation of admitting 25% children belonging to disadvantaged group/EWS and to grant them free ship. In this manner, more and more schools are shutting their doors to the EWS and disadvantaged category of children and becoming exclusive schools.

Another facet of this exclusion of the minority schools from the ambit of the RTE Act is that various progressive provisions such as ban on corporal punishment, prohibition on screening and capitation fee, prohibition on holding back and expulsion till completion of elementary education and the norms and standards given in the Schedule to the Act have become inapplicable to these schools, exposing the students studying therein to the arbitrariness of the school-authorities. These provisions satisfy the test of reasonableness and do not in any manner dilute the minority character of these institutions. Therefore, these provisions should be made applicable to the minority schools.

In the premise afore-said, you are requested to take steps to bring an Amendment Bill in the Parliament to remove the Constitutional barrier upon applicability of the RTE Act, 2009 to aided and unaided minority schools in order to end the existing regime of unjustified immunity from the RTE Act, 2009being enjoyed by these schools. 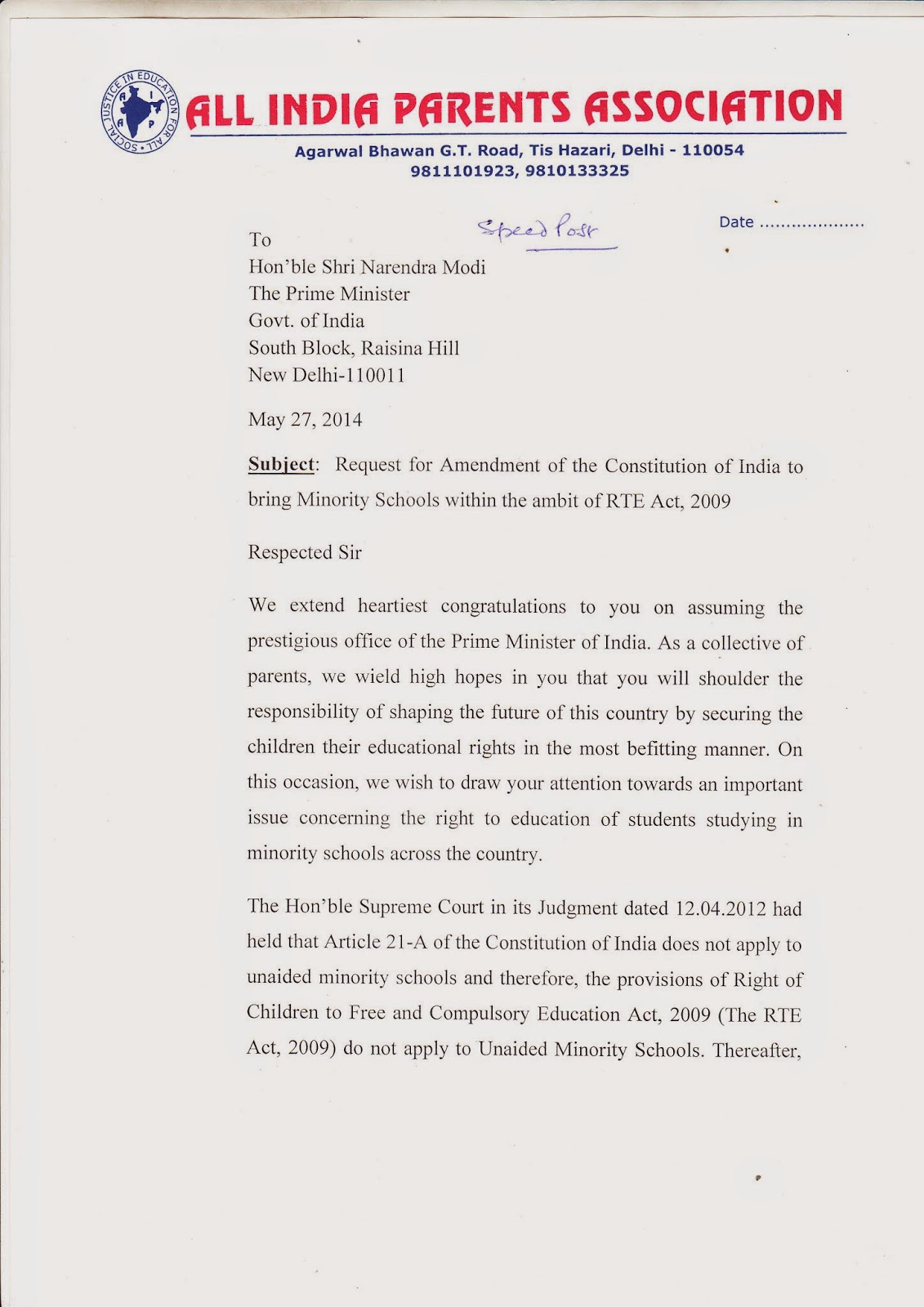 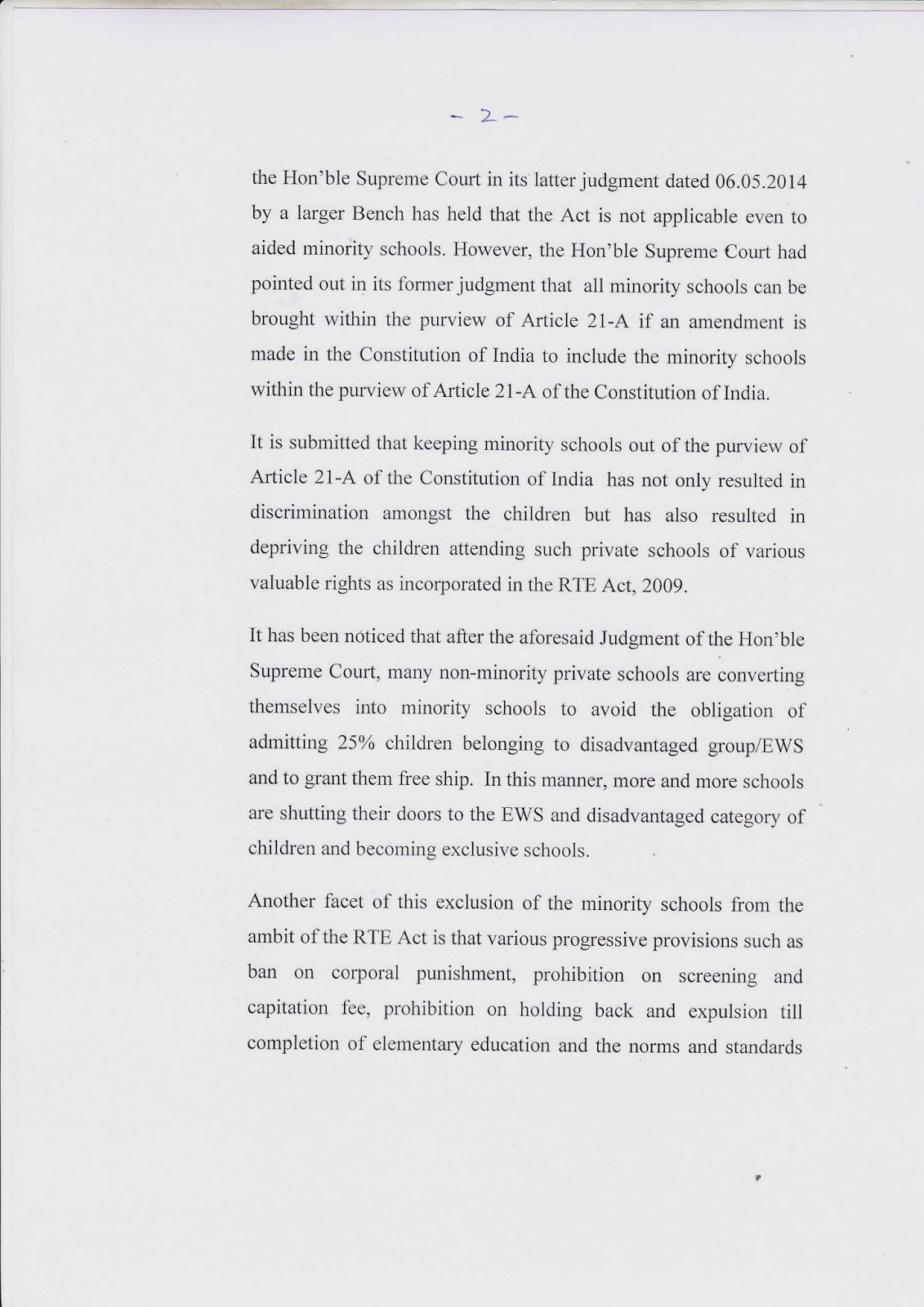 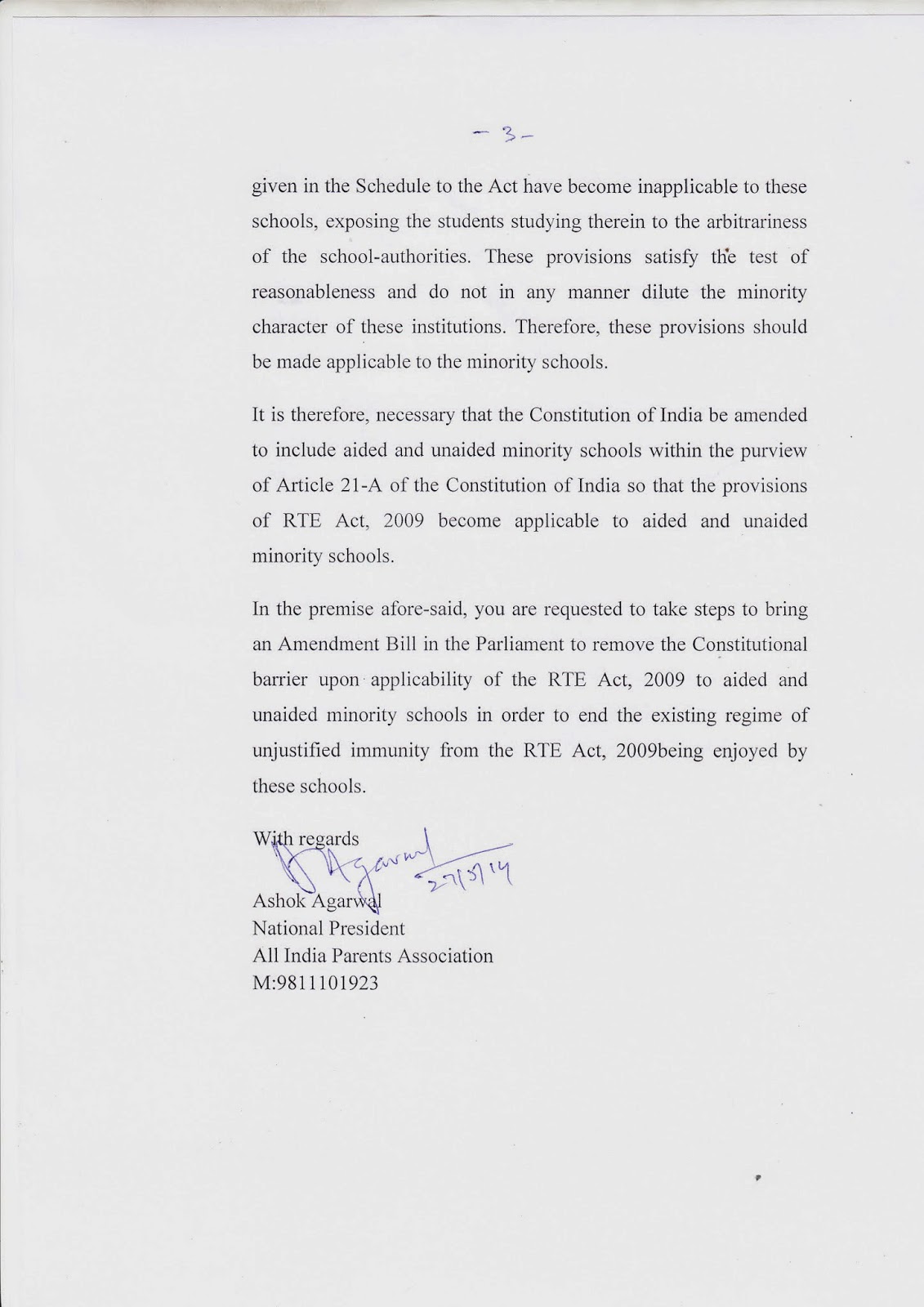