Sub: Request to immediately bring amendment in Delhi School Education Act, 1973 to protect the rights of children to equal treatment in the matter of nursery admission in unaided recognized private schools

Every child has a fundamental right to equal treatment in the matter of admission to nursery class in an unaided recognized private school, which in essence has been incorporated in the Right of Children to Free and Compulsory Educaiton Act, 2009. However, the Delhi High Court learned single Judge Judgment dated 28.11.2014 in WP(C) 202/2014 and WP(C) 177/2014 has taken away this right. Unfortunately, a Division Bench of the Delhi High Court vide its Order dated 10.12.2014 in LPA Nos. 769 & 781/2014 has declined to stay this Judgment, leaving hapless children and parents at the mercy of the private schools. This needs to be addressed at your end without loss of any further time to protect the rights of the children particularly their Right to Education.

“117. Also, the restrictions cannot be imposed by way of office orders and that too, without any authority of law. In State of Bihar and Ors. vs. Project Uchcha Vidya, Sikshak Sangh and Ors., (2006) 2 SCC 545 the Supreme Court has held that the restriction under clause 6 of Article 19 of the Constitution can be imposed only by way of a law enacted by a Legislature and not by issuing a circular or a policy decision. Admittedly, no law or restriction has, in the present instance, been placed upon the petitioners by virtue of Article 21-A and Article 15(5) of the Constitution. Consequently, the Government cannot impose a strait jacket formula of admission upon the schools under the guise of reasonable restriction and that too, without any authority of law.”

The Divisions Bench refusal to grant a stay of the learned Single Judge Judgment dated 28.11.2014 shall have a bearing upon the upcoming nursery admission process by giving a free hand to the schools to pick and choose between tiny tots on their own whims and fancies. As a matter of routine, the admission process starts in the month of December itself every year. We are expecting the Director of Education Govt. of NCT of Delhi to file appeal in Hon’ble Supreme Court against the Division Bench Order dated 10.12.2014 declining stay of the learned single Judge Judgment.

However, to put the controversy at rest and resolve the matter for good, the Govt. of NCT of Delhi should immediately bring appropriate amendments in Delhi School Act, 1973. Needless to say that the desired amendments should be on the lines of Section 13 read with Section 2(o) of the Right of Children to Free and Compulsory Education Act, 2009 which prohibits ‘screening procedure’ in the matter of admission of children in the age group 6 to 14 years. Any delay in this direction would only perpetuate discrimination, arbitrariness and commercialization in education.

We, therefore, earnestly appeal to you to bring necessary amendment in Delhi School Education Act, 1973 in order to make Section 13 of RTE Act, 2009 meaningful. Needless to say, it would be most appropriate to bring the said amendment in the ongoing Parliamentary Session in view of the urgency to address the nursery admissions for the upcoming academic session 2015-16. 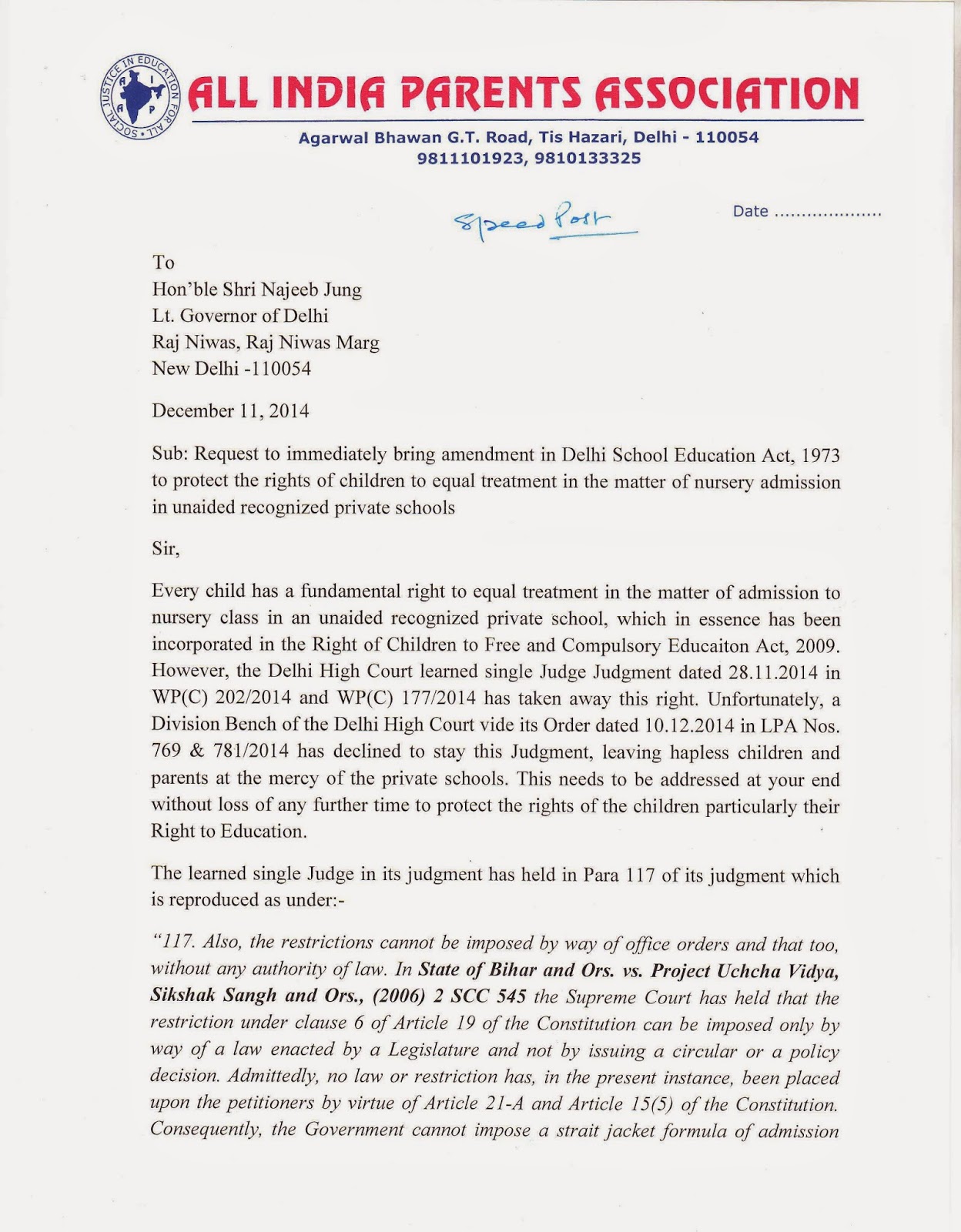 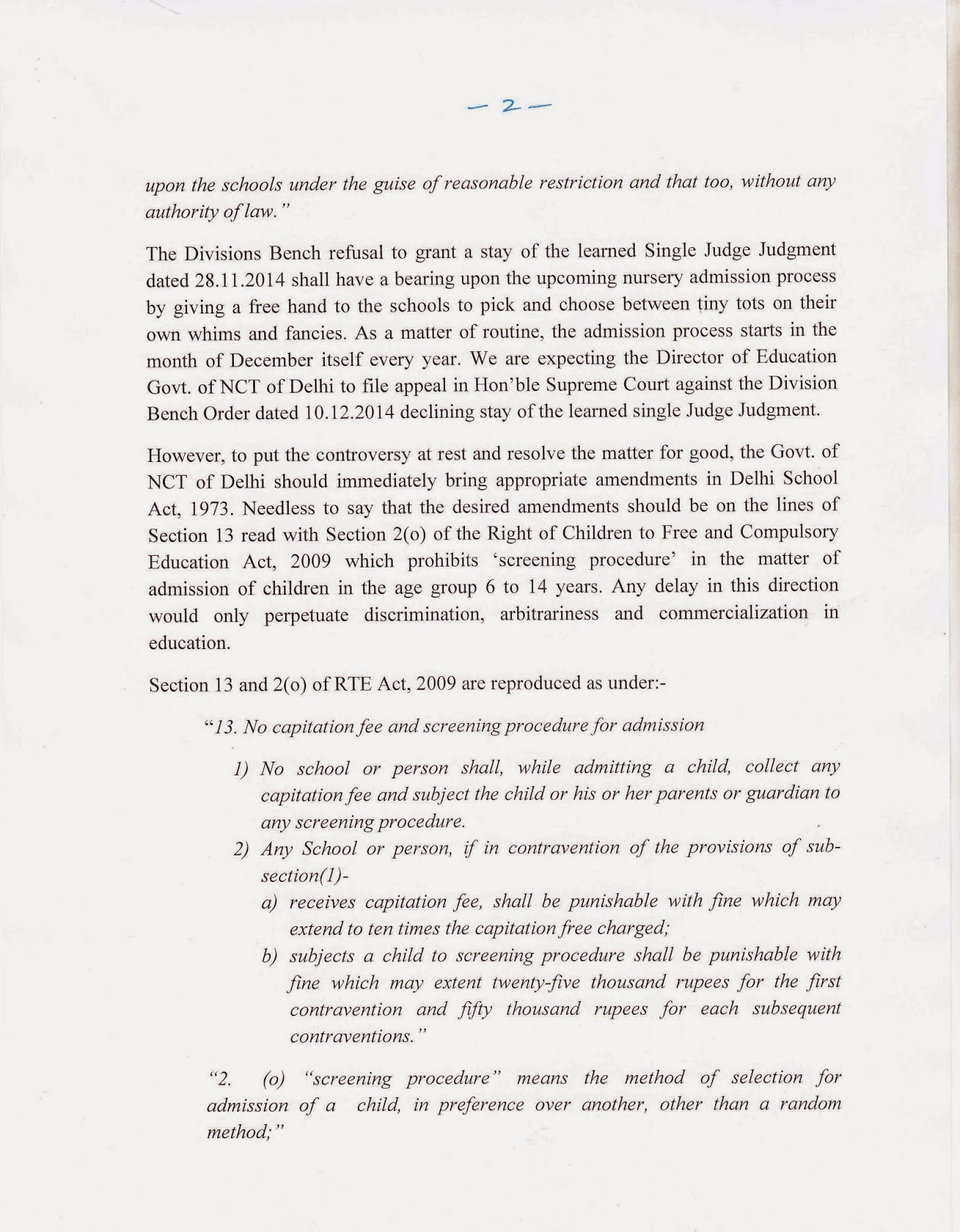 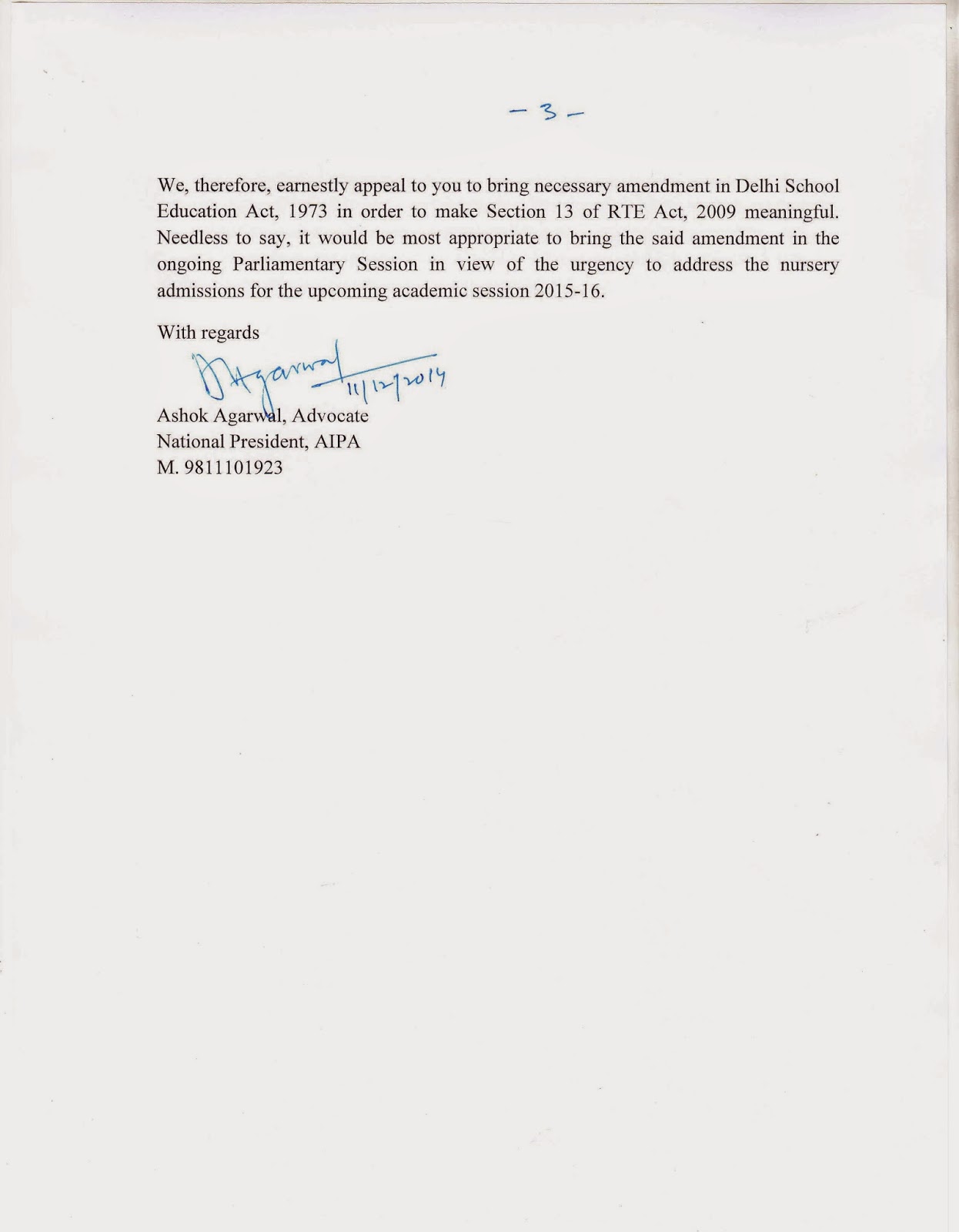