The present case highlights how even after a passage of more than 4 years since the enforcement of Article 21-A of the Constitution and of the Right of Children to Free and Compulsory Education Act, 2009, the Government schools in the city are not only reducing the Fundamental Right to Education to a dead-letter but also making a rude mockery of the same.

Priyanka and Chandni are two cousins, both 13 years of age, residing at A-122, Gali No.4, Shashi Garden, Delhi-92. Both are early childhood school drop-outs and now wish to resume their education as they see everyone around them going to school and feel left out. They also believe that education is the only source of knowledge and girls particularly must educate themselves.

Priyanka Sahni (M:9718921586), D/o Sh. Kamlesh Sahni and Smt. Meenu Sahni, had been living with her uncle and aunt in Calcutta. There she attended to school till Class III and thereafter dropped out. Recently, she has shifted to Delhi at their family’s residence.

Chandni Sahni, D/o Sh. Hari Ram Sahni and Smt. Asha Devi (M: 9718114790), resided in Bihar with her family in her early childhood. There she has attended to school till Class V. Some years back, her family moved to Delhi.

Priyanka and Chandni both along with their mothers had been making rounds to Sarvodaya Kanya Vidyalaya (SKV), Patparganj for quite some time but their admission was deferred every time by the Principal who would ask their mothers to arrange private tuitions for them in order to prepare them for school. Lastly, on 03.12.14, both of them went to school accompanied by their mothers. The Principal this time flatly refused to entertain them stating, “Jab marzi muh uthaakar chale aatey ho, yhaan kya koi bhandara laga hai? Agle saal aana!”  (You cannot walk into the school anytime at your convenience. There is no bounty being doled out here. Come in the next session.) Disillusioned by this response, the two girls approached social worker Ms. Sunita Chauhan who directed them to me. The mothers of these girls have made written complaints to me. (Copies enclosed)

It seems that the mandate of the RTE Act, 2009 that entitles admission into age-appropriate elementary class at any time of the year as a matter of right to every child in the age-group of 6-14 has not even been heard of in such schools. Either there is complete ignorance or blatant disregard of these statutory provisions which emboldens the school-authorities to mete out such treatment to children who approach these schools for admission despite all odds.

Unless certain stringent steps are taken to improve the situation, the goal of universal elementary education shall remain a far-fetched dream. Clear-cut instructions are required to be issued to all the concerned Delhi Government school-authorities in this regard and errant authorities must be taken to task in order to prevent violations.

You are therefore requested to ensure prompt admission of these two girls to age-appropriate class in SKV, Patparganj, and further that the routine practice of denial of admissions by Delhi Government schools is stopped for good, by taking appropriate strong and effective measures. 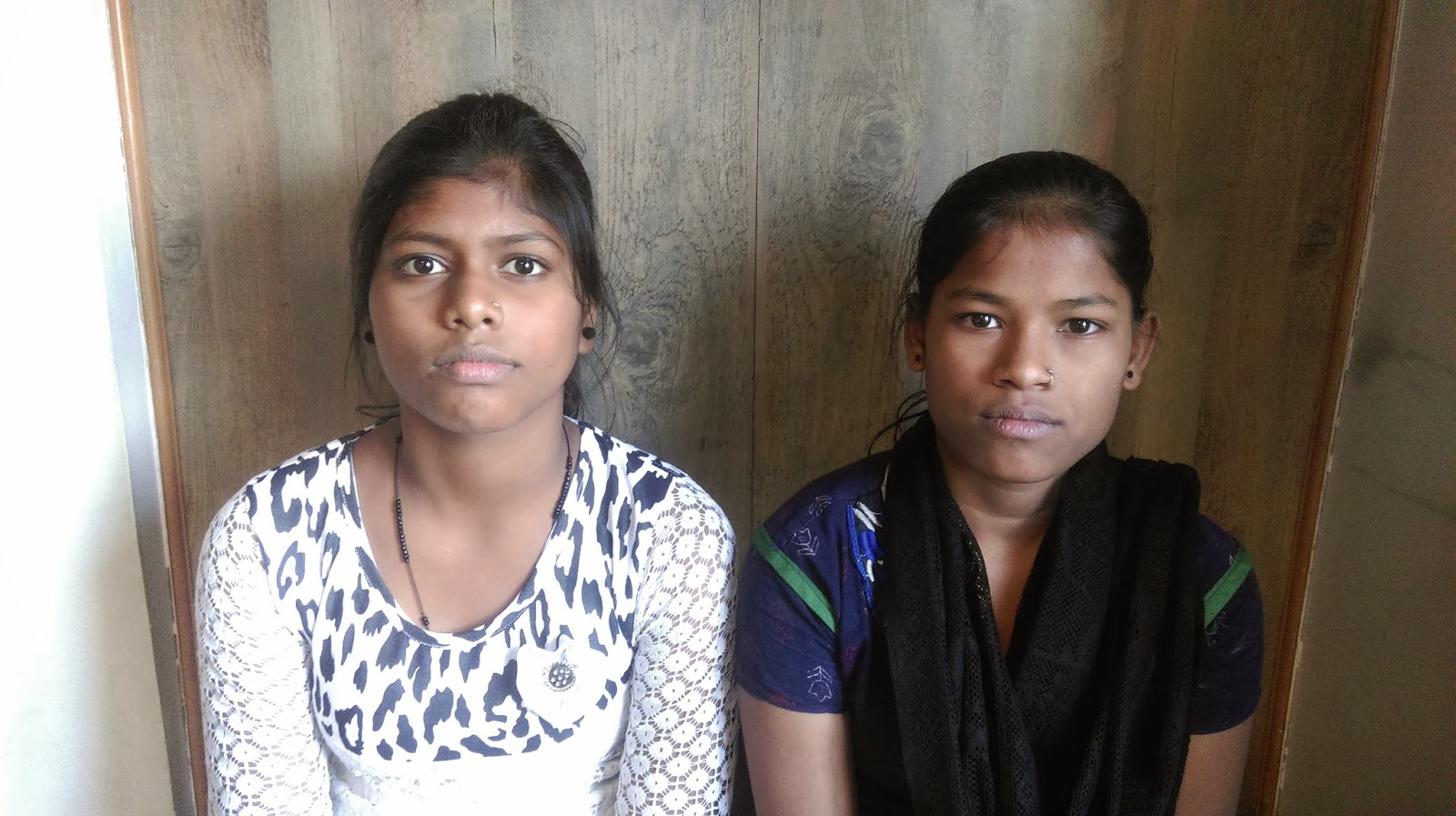 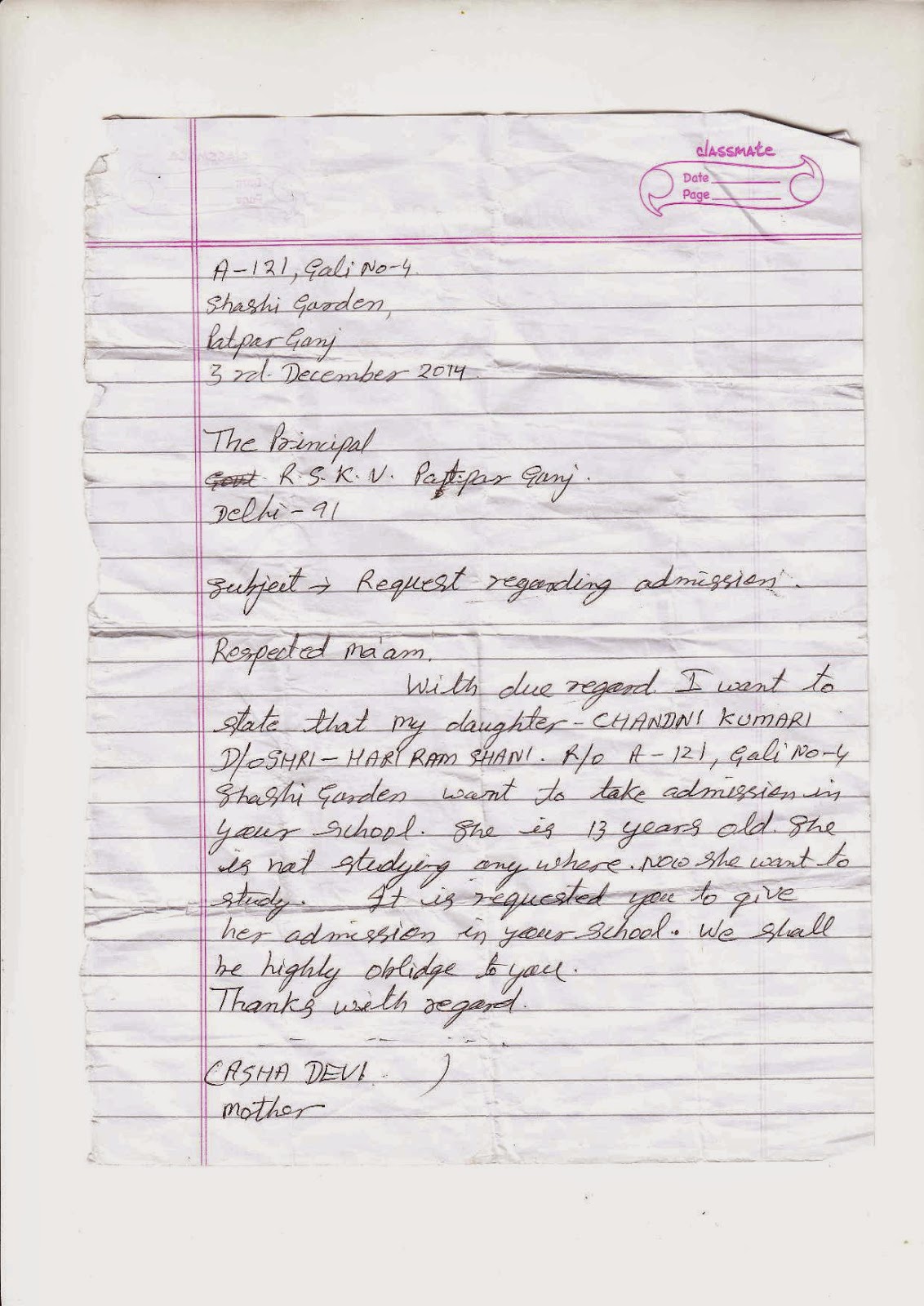 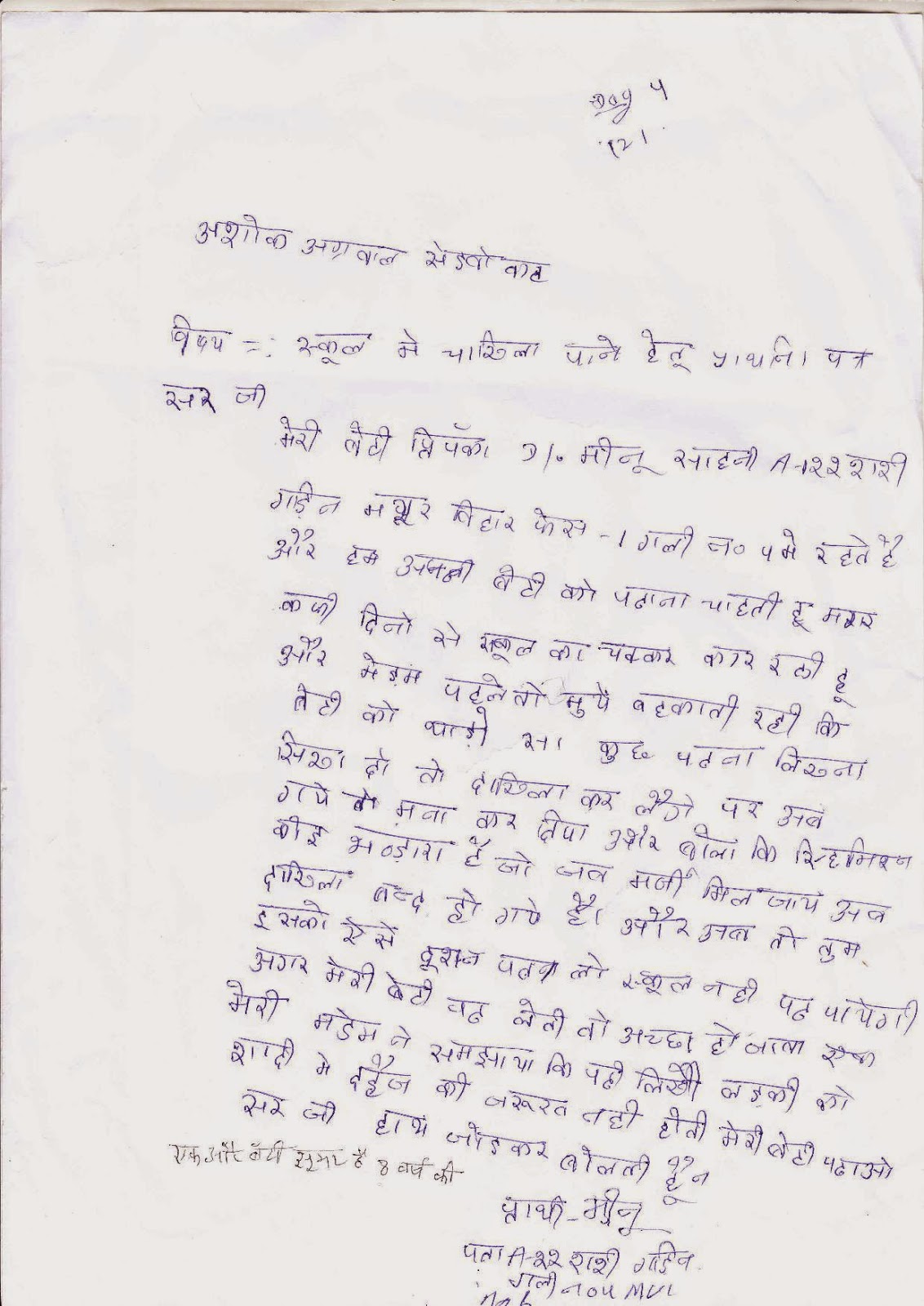 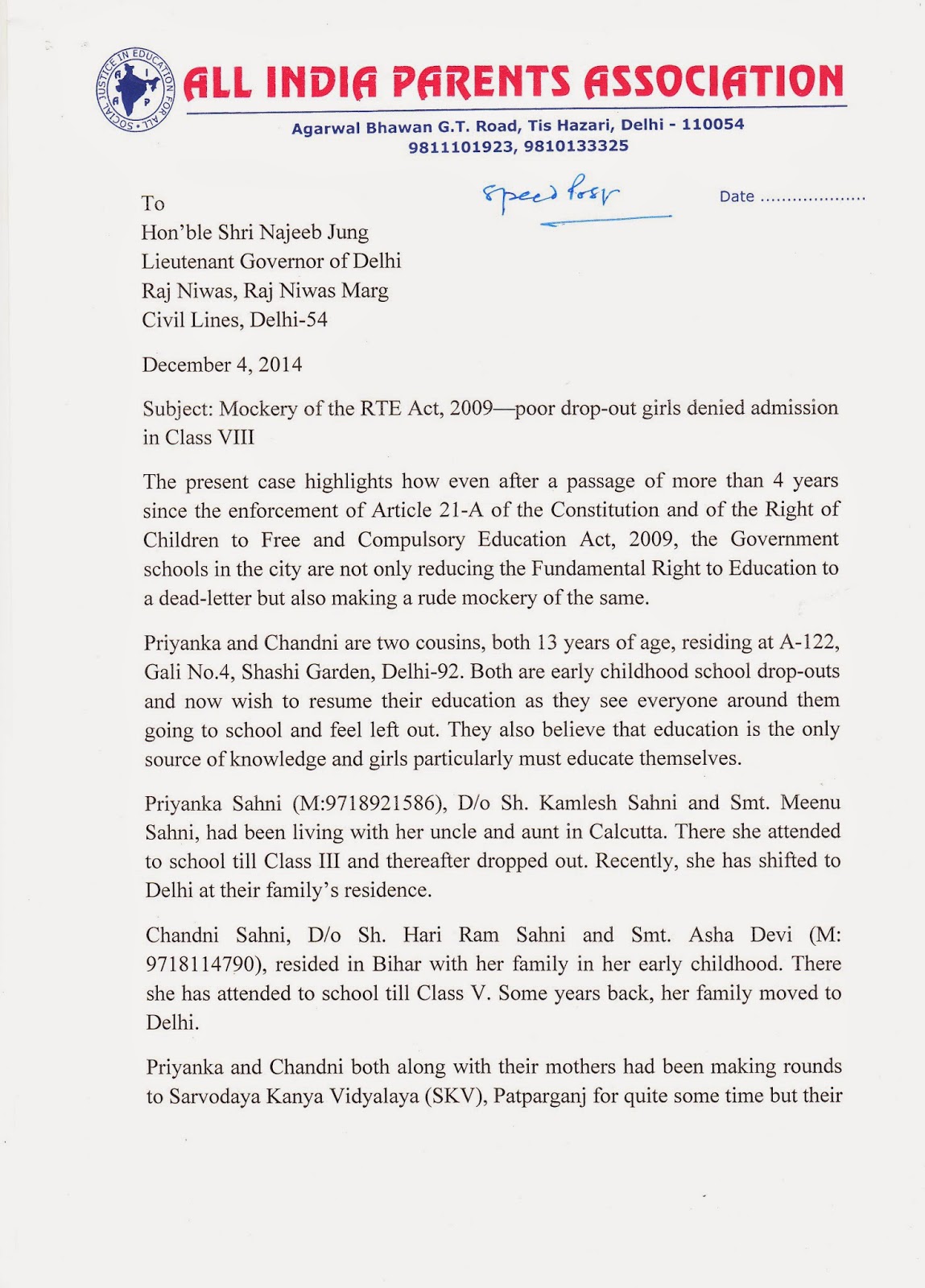 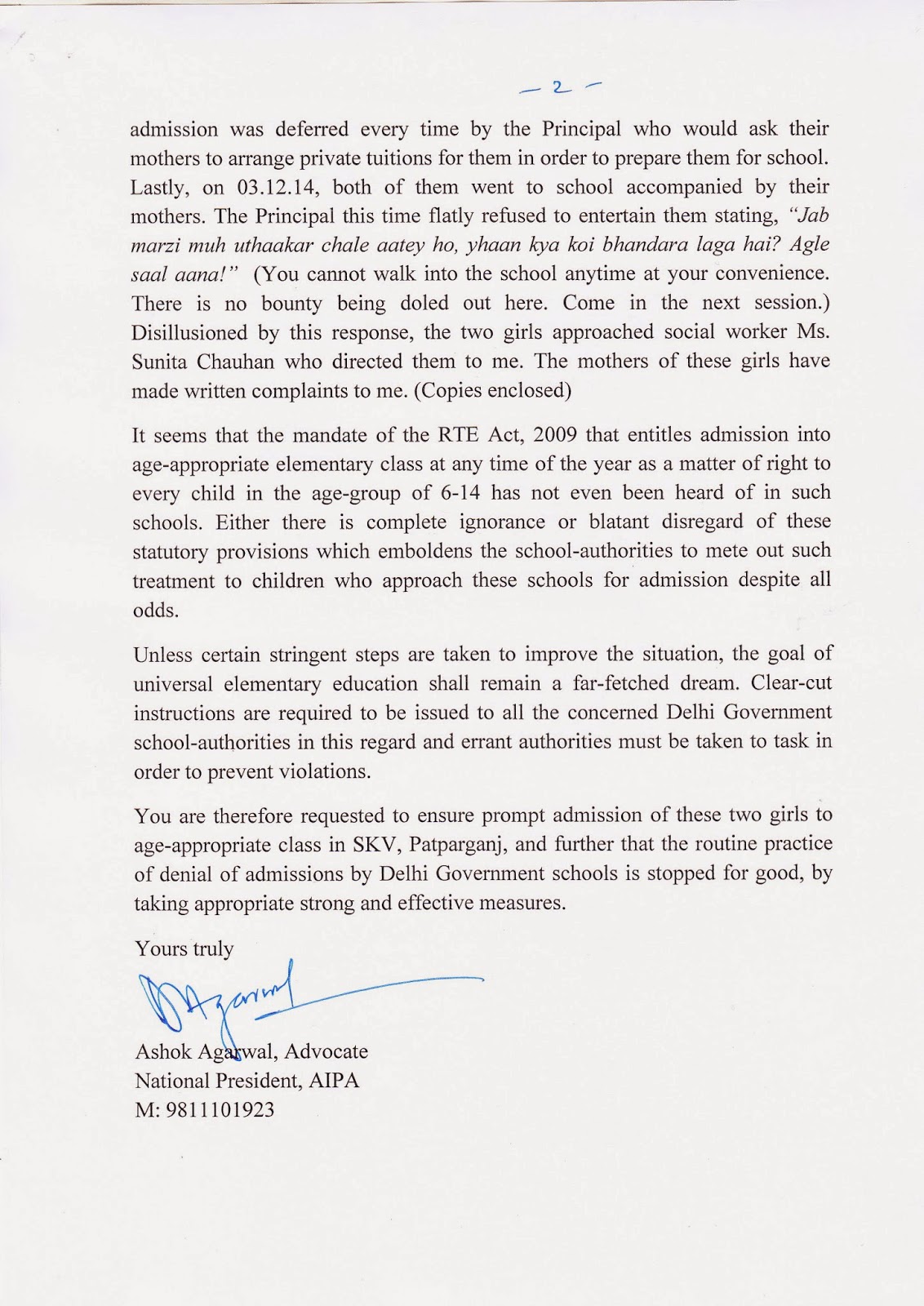